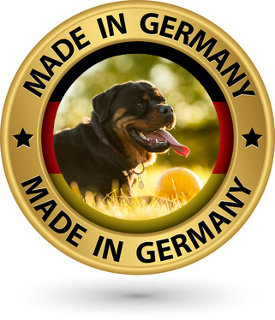 “Only German Rottweilers have those big heads!”

“German-bred Rotties are superior to the American ones.”

These sorts of comments can be heard every day, but are they true?

Well, there’s no simple answer to this, and my response would be both ‘Yes…….. and No’

If this makes you feel a bit confused, don’t worry – you’re not alone!

Rottweilers born and registered by the ADRK in Germany are the ‘cream of the crop’, and are the only TRUE ‘German Rottweilers’, but this is often where the confusion begins.

Read on to find out why German-born Rottweilers are usually superior to Rottweilers born anywhere else….. and to learn more about that tricky German v American Rottweiler question.

What Makes A German Rottweiler….. German?

There is a simple answer to that question, and it’s this ….

In order to be considered German, a German Rottweiler has to be born in Germany, or have parents who are German born with ADRK (Allgemeiner Deutscher Rottweiler Klub) registration papers.

But of course, it’s not always as easy as that – and this is just the beginning of the story.

Given the above statement, then all other Rottweilers born across the world are also ‘citizens’ of their country of birth….

… but this doesn’t explain why German Rottweilers are considered to be superior.

To fully understand that part, consider a puppy’s pedigree as the document that determines the quality of that puppy.

A pedigree shows a puppy’s bloodlines (or ancestors) – think of it as your pup’s ‘Family Tree’.

The quality of the dogs in your puppy’s pedigree directly affect the quality of your pup, both in terms of looks (‘conformation’), temperament and health. THIS is where the superior quality of German Rottweilers is found.

It’s also where some of the confusion over German v American Rottweilers is often found. Let’s put it this way…..

If your puppy was born in New York for example, he is by definition an American Rottweiler (by birth). But that isn’t what determines the size of his head, the quality of his hips, or the type of temperament he has. His bloodlines do that.

If his Sire and Dam are German born and ADRK registered, the chances of your puppy being an excellent representative of the breed are very high – regardless of which country he was born in.

But why is a German Rottweiler so much better than an American (or British, Belgian, Australian etc.) Rottweiler?

Why is having German-born dogs in your pup’s pedigree so important?

The answer to that lies with the ADRK in Germany.

What do I mean by ‘protect the Rottweiler breed’? Well, the original slogan of the ADRK was

‘Rottweiler breeding is, and remains, the breeding of working dogs’

This is an still a very important point today.

Always remember that although your little guy or girl may be destined for a life of luxury, as a much-loved family companion, the Rottweiler is a working breed.

Today the ADRK has a long list of aims, which you can read on the official ADRK website.

But I think it’s simpler to sum up this organizations aims like this ….

‘The ADRK defines and promotes the Rottweiler Breed Standard and enforces these standards through strict breeding protocols’.

This is the foundation for the superior quality of German-born Rottweilers.

No litter of Rottweiler puppies can be registered in Germany unless the Sire and Dam have passed the very strict ZTP (Breed Suitability Test).

This consists of a set of comprehensive conformation, temperament and health evaluations which are in place to ensure that only the best representatives of the breed are allowed to produce puppies.

Other factors are also included, such as the dogs age (must be at least 18 months old), hip classification (must have an HD- or HD+/- equivalent to OFA excellent and OFA good ratings), and have passed at least a basic BH Degree (similar to AKC’s CD or Companion Dog qualification).

Many other European countries don’t have the same rigorous standards, so even if a puppy is European born it doesn’t necessarily mean that it will be close to the quality of a German Rottweiler puppy.

In the USA, the United States Rottweiler Club (or USRC) has a similar test that it’s members dogs need to conform to.

It’s called the BST or Breed Suitability Test. You can find out more about this club at www.usrconline.org

Other countries follow the lead of the ADRK very closely, and although the Breed Standard for the Rottweiler dog varies slightly from country to country.

Any puppy that results from a properly thought out and implemented breeding program will be clearly recognizable as a Rottweiler.

That is the fact that in Germany a Rottweiler’s tail is now left natural, while the AKC Breed Standard (USA) requires the tail to be docked (cut short).

This regulations will change at some time in the future and dogs here will also be required to have natural tails.

As it is, US breeders who closely follow the FCI Code of Ethics, and who show their dogs in German-style ‘Sieger’ competitions here, are beginning to leave their pups tails un-docked.

If you aren’t looking for a pup to enter in AKC shows, then personally I don’t think there’s any reason to choose a pup with a docked tail over one who has a full tail.

A true German Rottweiler is one born in Germany.

German-born Rottweilers have to adhere to strict protocols when being bred, and consequently generally produce pups that are superior in conformation, temperament and health than elsewhere.

Rottweilers born in other countries can be of the same quality if they have excellent German bloodlines in their pedigree (including close relatives though, not just 4 or 5 generations back).

But they are not German Rottweilers, they’re ‘citizens’ of their country of birth, but with German ancestry.