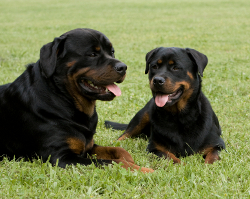 Everyone knows how Rottweiler dogs look and act, right? WRONG!

Although most of us have an idea of what the Rottweiler breed looks like, many people have the wrong idea about their character, and no idea of their history. I’d like to change that.

Read on to learn about the history and beginnings of these dogs, what they looked like a century ago, and how the ‘ideal Rottweiler dog’ looks and behaves.

I’m pretty sure some of the information here is going to surprise even dedicated Rottie lovers, so enjoy….

The Rottweiler Breed – Then & Now 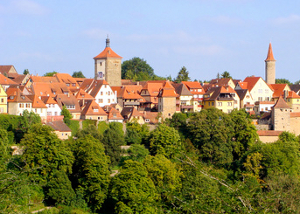 The Rottweilers we know today have changed a LOT since the breed first emerged in Europe during the Middle Ages.

From its’ early beginnings in the German town of Rottweil (from which they took their name, and whose traditional red tiles so closely match a Rotties stunning color), this awesome breeds’ popularity has spread across the world.

Rottweilers are seen in many countries today, including the US, UK, Canada, Australia, Spain, the Netherlands, Brazil, New Zealand, parts of Asia and S. Africa.

The Rottweiler breed likely developed from the mixing of several different breeds including Mastiff-type (or Molloser) dogs who were used as guardians, and herding breeds. Research shows that early Rottweilers looked quite different from the dogs we recognize today.

During the very earliest days the ‘look’ of the dogs took second place to their build and temperament. These were working dogs, and the priority was for them to fit the bill in terms of ability.

The characteristics that were needed in these early Rottweiler dogs were courage, intelligence, athleticism, strength and loyalty – and all of these are still clearly seen in the Rottweiler breed.

The Allegmeiner Deutscher Rottweiler Klub (or ADRK) is the parent club of the breed and is located in Stuttgart, Germany. It was established in 1921 and promotes and protects the interests of the Rottweiler.

From what has been recorded over the years, we can tell that the Rottweiler has changed a lot in terms of looks over the last century. In the early 1800’s dogs were considerably lighter and a bit shorter than the dogs of today.

The AKC standard calls for a height of 24″ – 27″, but with no specific weight requirement.

The temperament of Rottweilers has varied little over the years. In 1883 characteristics such as ‘courage, endurance and good nature’ were encouraged.

If you want to know how a Rottweiler should look, check out my Breed Standard page.

It compares excerpts from the AKC and the ADRK standards, and will help you paint a picture of the ideal Rottie.

The AKC Breed Standard for the Rottweiler breed calls for a dog that is ‘calm, confident and courageous… with a self-assured aloofness’. It also describes the Rottweiler temperament as ‘intelligent, adaptable and willing to work’.

The biggest difference between the Rottweiler dogs of a century ago, and those in our homes today are their physical appearance, particulary their color/coat/size.

In the late 19th Century, a whole host of different colors were allowed including grey, brown, red, blue, and even ‘tiger-stripes’. Patches of white were common, and the coats were generally thicker and longer.

Even today you’ll still occasionally see ‘rare’ rottweilers such as the ‘Red Rottweiler’  because the genes for this color still exist in a very few dogs. Whether a purebred is black and tan or red, doesn’t matter in terms of temperament, ability, size etc., it’s simply the outward appearance and a true purebred red Rottweiler is every bit as much of a Rottweiler as a dog with the accepted, and standard, coloring.

BUT there are unscrupulous breeders and dog owners who aren’t afraid to try to pass of a mixed breed Rottie as a ‘rare’ specimen, so if you see this type of dog for sale always do some thorough research to make sure that he/she is purebred.

An interesting little fact that you may not know, is that Rottweilers in the 19th century were often born with ‘stumpy tails’.

This is pretty much unheard of today, and I think that’s a shame! It would have saved breeders from having to dock all those tiny puppy tails just to meet the Breed Standard.

Also relating to tails, here’s is another interesting fact – todays’ ADRK Standard no longer calls for a docked tail, and Rottweilers are required to have a natural tail. In the US, a docked tail is still a part of the AKC breed standard.

In my opinion, Rottweilers are the perfect dog. They’re magnificent to look at, and their personalities are an ideal combination of strength, courage, affection and sweetness… what more could I ask?

Unfortunately the Rottweiler breed has been misunderstood and misrepresented over the years. In addition, a too-quick rise in the popularity stakes during the mid to late 90’s resulted in poor breeding practices and uneducated owners.

Many poor specimens of the breed, with incorrect physical and mental characteristics negatively affected the quality of the Rottweiler dog.

However, with their popularity declining over the last decade, the Rottie will hopefully have a chance to recover from this. I think it’s so sad that unless you own a Rottweiler, you probably have no idea just how amazing and exceptional they really are.

Of course, much as I adore them, Rottweilers aren’t for everyone.

They’re not Labradors or Golden Retrievers, and they don’t have that ‘I never met a stranger…’ attitude. Considering that they’re natural guardians, that’s really not so surprising!

Sometimes irresponsible breeding has produced dogs with just such characteristics, but poor breeding of any type of dog is likely to produce pups with poor physical and emotional health.

Rottweiler puppies should never growl or bite (with the obvious exception of normal puppy mouthing/nipping and play-growling). You should never encourage your Rottie to guard anything or anyone.

Becoming guardians and developing protective and territorial behavior is something that will come naturally to them as they mature, however it should always be appropriate and not random. Luckily Rottweilers generally don’t want to fight, and won’t bite when a bark or growl will do.

In spite of their huge physical presence and their courageous personalities, Rottweiler dogs are surprisingly sensitive. They need to be with ‘their’ people, and thrive in a close relationship with humans. They often pick one person to bond very closely with.

Rotties are very smart dogs and are eager to please. There is no need to shout or use harsh voices or punishment when training your dog. Always use positive training techniques and lots of praise – tasty treats are always greeted enthusiastically too!

The Rottweiler dog is included in the AKC and KC ‘Working’ categories, and their skills in this area are clearly seen in their heritage. Many still retain the herding instict of the early drovers dogs, and Rotties generally have a strong ‘prey drive’. This often translates into a strong ‘ball drive’.

They excel at obedience and tracking and there are many activities that you can enjoy with your Rottie if you don’t actually have a ‘job’ for him to do (such as herding your cattle or guarding your jewels!).

Rottweiler dogs can ‘do it all’, and I hope you have enjoyed learning a little about this amazing and wonderful breed. Enjoy your Rottie!

If you’d like to find out which questions are the ones most often asked by Rottweiler owners, check out my Rottweiler FAQ page right now 🙂