Have you heard about the red Rottweiler? Wondered about blue rottweilers, or been offered an albino Rottweiler pup? 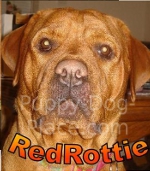 Does the idea of owning one of these ‘rare Rottweilers’ (often advertised as being valuable and highly prized) sound attractive?

Well, before you go out and buy one, you may want to learn a little more about these unusual Rottie varieties.

There can be health problems associated with a dog from any breed who is a very unusual color.

Plus a truly purebred red Rottie is extremely rare and although not black-and-tan, they’re a Rottweiler in every other way. But unscrupulous breeders may try to pass off mixed breed puppies as ‘rare rottweilers’ and that’s never okay.

So, make sure you do some research before committing to a dog of any breed who doesn’t fit the recognized breed standard.

A red Rottweiler may sound exotic, and there’s nothing fundamentally wrong with wanting to own a dog that’s a little bit ‘different’.

But, when it comes to purebred dogs, a lot of effort and work has gone into generations of breeding to produce a dog that looks, acts and moves in a certain way.

The Breed Standard for any breed is basically a ‘picture in words’ of the IDEAL representative of that particular breed, and all reputable and responsible breeders are trying to produce a dog that matches the breed standard as closely as possible.

When talking about a red rottweiler (or blue/albino etc.), it’s significant to note that although the Rottweiler Breed Standard varies a little from country to country, you won’t find any of the ‘rare’ Rottweiler varieties recognized or accepted in any of them.

If you compare the German, British and American standards for example, you will see slightly different wording or description of the Rottweiler color and coat.

BUT it’s clear that the only acceptable color for the base coat is black, and the markings are to be a shade of tan/rust/mahogany.

No mention of a red, blue or white coat at all. In fact, in the AKC Breed Standard these qualities appear under the section for disqualifications…..

Long coat. Any base color other than black; absence of all markings. A dog that, in the opinion of the judge, attacks any person in the ring.’

What Exactly Is A Red Rottweiler Then?

To understand how a red Rottweiler (or a blue Rottweiler etc.) can be born, you need to both look back at the early days of the breed, and also realize that a purebred dog only looks the way it’s supposed to if it’s ancestors are all purebred too! 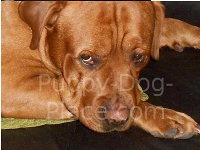 Although the history of the Rottweiler breed isn’t ‘written in stone’, it’s progression from companion to the Roman Army to today’s versatile dog, has been pretty thoroughly documented.

In the very early days, it seems that there were almost two different types of dog that formed the basis of today’s Rottweiler. Large, muscular dogs (of the molosser/mastiff type) were used as guardians/weight-pullers/companions for the Roman Army, and a bit later as protection for the cattle herders/butchers (and their money) on their way to and from market.

The smaller, faster, more agile dogs were used to herd and ‘drive’ the cattle as they were better-suited to the job. The smaller herding dogs often seemed to have more white patches in their coats, and this may have been believed to indicate that they were quicker and more trainable than the dogs who didn’t carry these genes.

History indicates that there may have been the introduction of other breeds into the gene pool now and again at this point, and that these two ‘types’ began to be combined to produce a dog that could ‘do it all’ – the forebears of the dog we now know as the Rottweiler.

This is borne out by the fact that the earliest Breed Standard for the Rottweiler allowed for a much greater variation in color/coat than todays’ standard. In addition, if you look at photographs of some of the first Rotties to be registered in Germany, you’ll notice that they look longer, ‘leggier’, and lighter than you would expect, and you can even see some of the difference in coat length and color.

In 1883, the acceptable colors for a Rottweiler were…

White markings on the chest and legs occur very frequently and are admissible if they are not too extensive.’

So, it’s easy to see how the genes carried by some of these dogs could possibly result in todays ‘rare’ red Rottweiler or blue Rottweilers, and how the white marks and spots (that still appear in even well-bred puppies) originated.

It wasn’t until 1921 that the ADRK (Allegmeiner Deutscher Rottweiler Klub) in Germany decided to limit the acceptable Rottie coat to ‘black with clearly defined mahogany to yellow markings’, and the other coat colors and variations become undesirable.

Is The Red Rottweiler A Real Rottie?

This means that the chances of a red Rottweiler being produced naturally by two purebred parents are extremely low! Doesn’t mean it couldn’t happen, but it’s VERY unlikely.

Which makes Kayla – the gorgeous red rottie featured on this page – so unusual. She’s Rottweiler through and through, but has a beautiful deep red coloring that is stunning…..

For purebred Rottweilers to produce a red Rottweiler puppy, they would both need to carry this very elusive gene.

So, where does a red Rottweiler today come from?

Most breeders and Rottweiler experts believe that these type of rare Rottweilers are the results of cross-breeding (breeding a Rottie to a dog of another breed). Not necessarily (and usually not) the actual parents of the ‘rare’ puppy, but definitely within their individual or collective family trees.

This is why a red Rottweiler or blue/albino Rottweilers aren’t recognized or accepted by Rottweiler Breed Clubs or registering organizations, and why dogs with more than a few white hairs are not considered to be of show quality.

There are other issues in addition to the cosmetic ones too. Some breeders and experts believe that various health issues appear more often in the rare Rottweilers, possibly due to the in-breeding that produced them, or as a genetic/hereditary issue.

Some of these include eye problems (more often associated with the lighter colored eyes seen in red rottweilers and blue rottweilers), heart problems and hip/joint problems.

Given this information, you can clearly see why breeding red Rottweilers (or any rare Rottweiler) isn’t a good idea, and how it could potentially damage the breed as a whole.

Some unscrupulous breeders are willing to jeaopardize the wonderful Rottweiler breed in this way, and try to pass these rare puppies off as being ‘special, unique, desirable’ and so on, all the while charging you extra for the privilege of owning one!

While a true purebred red Rottweiler definitely is rarity, he (or she) is not eligible to be registered or shown. He should never be used as a breeding dog either.

To learn more about Kayla, the purebred Red Rottweiler whose photos appear exclusively on this website, check out this page…

Submitted by a visitor to this site, these are some of the best photos of a purebred Red Rottweiler that I’ve ever seen.

If you come across one of these dogs and want a pet that is a little bit different, by all means, buy one (but don’t allow yourself to be conned into paying throught the nose for it), but remember you may find yourself with a dog who needs extra veterinary attention and care.

The Rottweiler is an awesome dog, and red/blue/albino (or whatever) Rottweilers are likely to make great pets and a be a ‘talking point’ with your friends.

But if lots of people want to buy one we end up encouraging a breeder to try to continue to produce ‘red’ puppies – and as they occur so rarely naturally, that lends itself to all sorts of problems (and can’t be a good thing in my opinion).