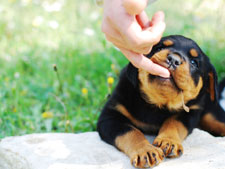 Although practically all puppies indulge in this behavior, you need to do your best to stop puppy biting right from day one!

Some puppies (and some individual breeds) tend to bite, nip and ‘mouth’ more than others.

Herding breeds, retrievers and terriers tend to be among the biggest ‘offenders’, but ALL PUPPIES BITE and nip at some point, especially during the teething stage.

Although puppy biting might seem pretty harmless in an 8 week old pup, it can quickly become a big problem.

All puppies have razor sharp little teeth, but when you combine these with a set of powerful Rottweiler puppy jaws, the need to put an end to this behavior soon becomes (painfully) obvious!

How To Minimize Biting & Nipping Early On

While it’s true that all puppies bite, there are certain behaviors and situations that increase the odds of your pup morphing into a ‘snapping turtle’!

Puppy biting, nipping and mouthing is a normal part of sibling interaction and this is one of the reasons that puppies need to stay with their momma and littermates for at least 8 weeks.

‘Bite inhibition’ (learning just how much pressure they can apply without getting in big trouble) is learned during the rough-and-tumble of sibling play, and puppies who leave the litter too early miss out on learning this valuable social skill.

Now, whether they ‘leave the nest’ at 6 weeks or 10 weeks, puppies will still bite and nip on occasion, but the more ‘practice’ your little guy has had at home, the better he will be at understanding the concept of ‘no puppy biting allowed’.

To help stop puppy biting before it gets started, there are some simple steps that you can take to reduce ‘triggers’ for this behavior. For example….

Most of the time a biting puppy is simply trying to play with you, or get your attention.

So, the best way to stop this behavior is to make sure your pup doesn’t get the response he’s hoping for :o)

When puppies play together and bite/nip at each other, they soon learn that it’s not well-tolerated by their siblings.

A pup that consistently bites hard and doesn’t learn to have a ‘soft mouth’ (gentle, play-biting) soon finds that no-one wants to play with him! This brings the lesson home and he learns to modulate his behavior in order to be accepted.

You can teach your pup in the same way (a way that he will naturally understand), by making sure that he understands that it hurts when he bites you – and withdrawing your attention from him when he does so.

This is the simplest way of training a puppy not to bite….

As soon as you feel those tiny puppy teeth on you, squeal or yelp and say “OUCH! NO BITE”. Don’t shout though as this will make your puppy more excitable and is likely to increase the biting behavior. 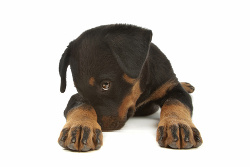 As soon as you’ve let your little guy know that he’s hurting you, withdraw your attention from him right away. If you’ve been playing with him, stop the game. If you were petting him, stop. Cross your arms in front of your body and don’t make eye contact with him, turn you back if necessary.

Do this for 30 seconds or a minute or so, or however long it takes for him to stop nipping and wonder what’s up. As soon as he stops his puppy biting, tell him “good, no bite” or something to that effect and go back to what you were doing.

If you weren’t interacting with him at the time the biting started, follow the first part of the directions above, but rather than simply ingoring him, redirect his attention to one of his own chew toys first.

If you’ve tried Method I consistently with no (or limited) success, you may have a more stubborn puppy biting machine on your hands! 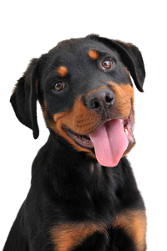 Some breeds are pre-disposed to biting/nipping due to their original job description – for example herding breeds who ‘nip’ at the heels of livestock to keep them moving.

Other breeds that may be mouthy include Labrador Retrievers and other hunting breeds who use their mouths to carry game and so on, and German Shepherds and Bull and Terrier breeds are also often pretty prone to puppy biting.

If you own one of these breeds, or simply have a pup who is particularly stubborn or single-minded, this second ‘stop puppy biting’ techinque should do the trick!

Again, follow the first part of Method l correction (the “Ouch! No Bite” part) and then use a more tangible correction. In this case the correction is a quick squirt of water in your pups mouth/face.

You need a small plastic spray bottle (easily found at drugstores or supermarkets) filled with plain tap water, and a good aim! Most pups are very surprised when they get wet, and don’t like it much either. A few repetitions of this and they soon get the message.

Don’t worry, it doesn’t hurt them, and as long as it’s a small bottle and a gentle squirt it won’t frighten them. Obviously you also want to avoid spraying their nose directly, or in their eyes, so as not to cause discomfort.

The majority of puppy biting can be corrected using one of the methods above, but there are a few extra-stubborn pups for whom biting seems to be a behavior hard-wired into their little brains. 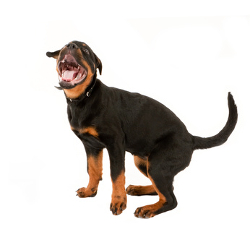 There are a couple of additional options that you can try with these pups, but only after using the above methods consistently for several weeks without success. These are…..

Breath Spray
This is exactly the same as ‘stop puppy biting method ll’, except you replace the squirt bottle with a small, breath-mint spray. Most pups hate the taste of these and a quick squirt ON THE TONGUE is enough of a deterrent.

Note that you do not spray these into your puppy’s face, so you need to be very careful in your aim. If you get this spray in your pups eyes or on his nose it will be painful and can cause serious damage. Get it on his tongue ONLY.

However, the occasional pup will actually LIKE the breath mint taste (I own one of them!) so in those cases, try one of the following ideas instead.

Shake Can
Most puppies are startled by loud noises and don’t like them, so you can often stop puppy biting by getting your little guy to associate his biting behavior with a loud, unpleasant noise.

For this you need to fill an empty can of some sort with small rocks or coins. Then whenever your puppy starts biting, go through the verbal corrections outlined above, and accompany it with a loud shaking of the can. This usually has the desired effect pretty quickly.

Scruff Shake
Momma dogs correct their puppies by taking hold of the scruff of their necks and giving them a quick shake. A puppy recognizes this as being a behavioral correction, so you can use it for the same effect.

I don’t like using physical corrections like this, and with large breed pups you want to ‘get physical’ as few times as possible. However, it’s here as a type of last-resort stop puppy biting method.

In this case you just follow the verbal correction by taking a firm (but not aggressive) hold of the loose skin on the back of your puppy’s neck and giving him a quick shake. It shouldn’t be enough to hurt or scare him, just enough to get the message across that you are not happy!

Muzzle-wrap
If none of these methods work, you can try the ‘muzzle wrap’, but it’s important that you do this GENTLY but firmly, and without anger. It’s also a physical correction, but if done properly it’s very effective without being too harsh and it shouldn’t ever actually hurt your pup.

You gently but firmly wrap your hand around your pup’s muzzle (make sure not to cover his nostrils) while giving him the usual verbal correction. Hold his mouth closed for a few seconds while repeating the ‘No bite’ command, then let go.

If he comes right back at you snapping, then repeat the process but hold on for a few seconds longer, many pups will whine and stop struggling at this point and you’ve made your point.

NEVER hold your pups muzzle for more than about 10 seconds and don’t hurt him. This is a last-resort ‘stop puppy biting’ method and is usually effective with the most stubborn puppies, but occasionally you will have one that reacts in the opposite way and becomes agitated, upset and angry… resulting in an increase in biting.

If this happens, don’t use this method as it will be counterproductive.

(Another variation of this that may occasionally need to be used in extreme situations involves putting your thumb under his tongue while supporting his lower jaw with your fingers. This should not be used lightly, and should also be done firmly but without anger.)

Any of the tips/techniques above will only be effective if you’re consistent about using them… and if everyone in your house does the same thing.

Inconsistent training will confuse your pup and make him anxious. A firm, loving and patient attitude combined with the right techniques will win the day.

Good luck and hang it there, he WILL learn this lesson given time 🙂