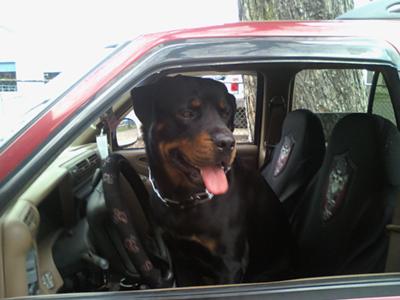 silly boy thinks he can drive!!

I know that this breed has a high chase instinct, but I need to know how to slow Zeus’ down.

We have a baseball hoop where my son plays right on the other side of our chain link fence. When he tries to play Zeus goes crazy running back and forth barking. I try to make him come sit by me and stay but it’s like the temptation is too much for him. We had to resort to putting him on his chain to keep him from the fence line.

He does the same thing when someone walks close to the fence which i prefer to keep it that way. As we have had a lot of break-ins in our community. My question is will training him to not bark and “chase” when my son plays ball confuse him of his “job” while in the fenced yard when we are not home???

Also the temperature has went up into the 80’s here today and Zeus is not wanting to eat like he usually does. Could the weather be the cause of that???

Thank you sooo much for the work you do for this breed!!!!

Hi Charlotte
Sounds as though overall Zeus is still doing great, there are always going to be ‘issues’ of one sort or another with pets… after all, they’re having to adapt to a human lifestyle and demands, and they’re not human!

Rotties do have a strong prey drive, but many of them also have a very intense ball drive (my male is this way) and it could be the ball as much as your son that is getting Zeus all wound up. Unfortunately it’s going to be very difficult to stop him from behaving this way as it’s a trait that’s pretty much ‘hard-wired’ into his brain and his reaction is instinctive – he doesn’t even think about it.

It may be that if you give him his own ball to play with at the same time, that he’ll get engrossed in that and not pay as much attention to the basketball shots. BUT, he could also totally ignore his ball when your son is playing. These big dogs can tear up any ball very quickly, so you need to keep a close eye on him, and replace any ball that is damaged. My Nero has a bowling ball to play with and he LOVES it. He can’t damage it, and he can’t pick it up, he just pushes it around with his muzzle and front legs and it keeps him busy and active. You might want to try that for Zeus.

The best thing to do would be to put up some kind of fencing that he can’t see through, maybe a wood fence, or rig up some kind of non-transparent covering on the far side of your chainlink. If he can’t see the ball he will probably be less vigorous in his chasing, but he will still hear it and that is likely to also cause him to bark and run. Other than that I would just recommend keeping him indoors when your son is playing!

This shouldn’t have any effect on his desire to bark at people outside the fence. Don’t encourage that either though, it can be a nuisance to others and if he starts throwing himself at the fence etc. it won’t help the Rottweiler reputation at all. Even a quiet dog is perfectly willing and able to protect his family if the need arises and wouldn’t welcome a stranger onto his property.

When it’s hot outside dogs tend to eat less, especially those that spend a lot of time outdoors. So his smaller appetite is probably related to that. Rotties don’t do well in the heat though, they’re big dogs with dark coats and they can overheat easily. I’d really suggest that you keep him indoors as much as possible through the summer to keep him happy and healthy.

Hope this helps, Zeus is looking wonderful, keep up the good work.