A Love Of RottweilersTopaz, the best Rottweiler in every way! | A-Love-Of-Rottweilers 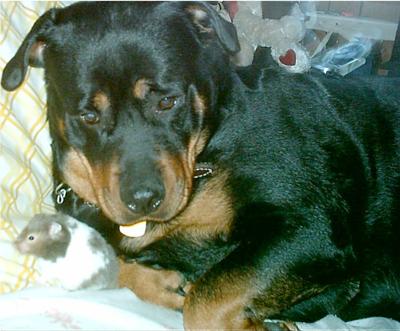 Topaz loving even the smallest animal 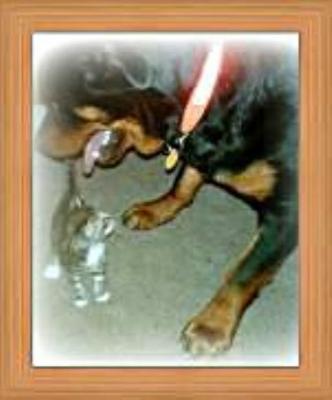 Topaz and the kitten 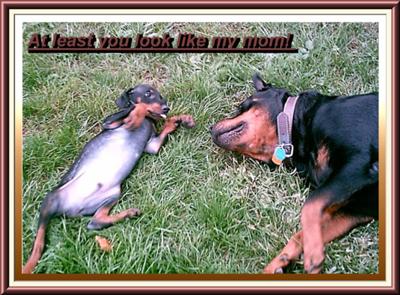 Topaz and the Doberman 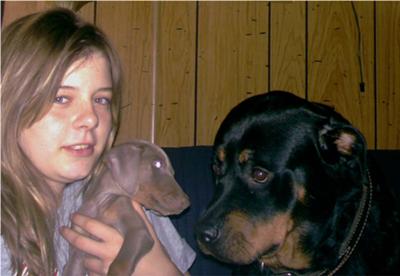 That look of friendship

Topaz is a puppy that we whelped from our Girl Bear, We found the right Rottweiler (Hungary Import) V. Furtchols Artur he was temperament tested, V3 Rated and looked like a army tank.

Well that December Day Came when Hess’s Beautiful Blue Topaz arrived on Dec 9th 2003 She was Beautiful from birth. I owned her mother and her mother’s 2 parents and even one of her grandparents so I knew 90 percent what I was going to produce and was very happy.

Since birth Topaz has always been loyal, loving, obedient, a role model for the younger pups that were raised with her and she paved the way in our neighborhood to show Rottweiler’s are KID FRIENDLY (we have several pics of her a different kids) DOG/PUPPY FRIENDLY (we have several pics of her with Mastiff and Doberman pups as well as pictures of her with a hamster and kitten.

Topaz loved dressing up for Halloween and going out with the kids on Halloween, She would wear a Santa Clause hat on Christmas the kids would put on her and she would be so proud. Topaz was the perfect companion dog and that should be any pet owners first priority as it was mine. But I knew I wanted to further that bloodline on as the temperament for generations behind Topaz was great, and the obedient nature of her and the relatives behind her was fantastic as I knew most personally either by ownership or personal contact.

On December 26th Topaz produced me a litter of pups that later I would find myself in demand for to achieve her bloodline of dogs that have been with me since the beginning of my Rottweiler Ownership years (1992) is when I got my first Rottweiler and now I don’t want any other breed of dog by a Rottweiler.

Topaz was very much aware of everything big or small,whether it was a threat or not you could count on her to be watching all the time. Topaz was a peace keeper with the other Rottweiler’s that we owned, and now that lives on in some of her off spring specifically one named Riley he is what a rottweiler should be.

He has the best temperament you could ask for even his vet thought so and she is now the owner of a Topaz grandbaby by Riley, Riley has the black with rich red mahogany markings, he is a super nice size Rottweiler that has a stretched tree trunk body, his head is block style with a look that give’s you a expression of his thoughts and character, not to mention the well defined markings that are of rich mahogany color over the eye’s, on the cheeks, the paws that lead up the leg, and on the chest in the shape of a bow tie.

This bloodline is sought after by even the most perfectionist Breeder’s, Handler’s, Trainer’s and/or current/future/past Owners. Riley is the total package as he is out of Topaz and his father is Baby Boy Gil a son of (Champion Gil Crni Lotos) who is known for his championship titles across the world and in the United States. Champion Gil is also known for producing healthy puppies time and time again that are able to be titled and clear all necessary health clearances needed on a parent before they breed to insure the best possible puppy.

The Crni Lotos line is seen over and over again on several different breeder’s website as well the offspring he produced nationally. Topaz will live on in her offspring, (Riley) will be the best possible prospect to keep that generation of dogs alive and producing in hopes to achieve the best specimen of the Rottweiler Breed!