A Love Of RottweilersSister puppies fighting - what to do? | A-Love-Of-Rottweilers 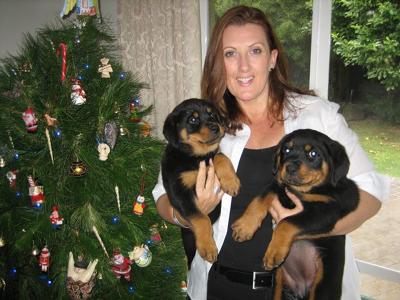 We have bought two sisters (10 weeks) and are experiencing them fighting off and on all day long. Sometimes they get very very involved and we get worried. Some advice from vets we are getting is “they will fight forever and it will escalate to the point of hurting each other”. Do you agree with this. Do you think they will “sort it out” and calm down? The breeder said “you can bring one back if you like”.

We don’t know what to do, but feel if giving one back is the best option for the puppies, we would like to do it soon to allow for the puppy to better bond with it’s new family. Any help would be greatly appreciated.

PS – We’ve had Rotties before

Hi Philip and Mary
Those are beautiful girls you have there!

It’s a difficult situation you’re in and there aren’t any ‘absolute’ rules about this, but in general I would agree with your veterinarians’ assessment I’m afraid.

Two adolescent or mature dogs of the same sex (even if they’ve been raised together) are likely to be combative with each other, and it’s possible that it can get to the point where one of them – or both – gets hurt.

A lot depends on the personality and temperaments of the dogs themselves, and sometimes if you have an ‘alpha’ dog and a fairly submissive dog, they will work it out between them as long as the submissive one doesn’t challenge the other. Usually with puppies the aggression is limited, and puppy fights sound much worse than they actually are, and it’s possible that your girls may manage to hash out an acceptable ‘balance of power’, but there are absolutely no guarantees I’m afraid.

Even without this problem, raising two puppies at the same time is a LOT of work and you have to spend plenty of one-on-one time with each individual pup so that they bond more closely with you and your husband, than with each other. It’s definitely not an easy task but can be done if you’re devoted, patient and willing to put in the effort.

You have a couple of options here and as you’re familiar with the breed, and already aware of the possible problems you may want to try to keep your two girls and work on it. If you do that I would advise having them both spayed as soon as your vet recommends, and try to recognize which is the ‘alpha’ pup of the pair and treat her as such. If you greet her first, put her food bowl down first etc. etc. you will reinforce her position and she will be less inclined to try to show you who’s boss by picking on her sister.

This is sort of counter-intuitive to what a puppy momma wants to do, which is protect and ‘coddle’ the one who’s not so bossy. But that behavior doesn’t translate well into the dog world and may make things worse. As they get older you may also want to keep them crated separately when you’re not around to supervise. When they do play together, try to let them work things out themselves, but if it gets nasty to the point of drawing blood, or one pup continually takes away the others toys etc. etc. you need to step in. Although one puppy is going to be more alpha than the other, you and your husband are still the TOP DOGS and both pups need to know that.

Alternatively, you could return one of these girls to the breeder so that she can have a chance of getting another good home where she won’t have a sister to fight with. If you are absolutely certain you want two puppies, you could try adding a male pup instead – this usually works out better as two pups (or adult dogs) of the opposite sex are much less inclined to do more than squabble a bit.

Or you can return one puppy, and raise the other as an ‘only child’ and once she’s fully mature, add another pup (make it a male) so that you have your two-Rottie household.

I did answer a question that is in some ways similar to this earlier this week, and although I think I’ve covered everything here too you may want to check it out here First Time Rottweiler Owner Questions

I wish you the best of luck with whatever decision you make.