A Love Of RottweilersSelective Aggressive nature displayed- Any suggetions? | A-Love-Of-Rottweilers 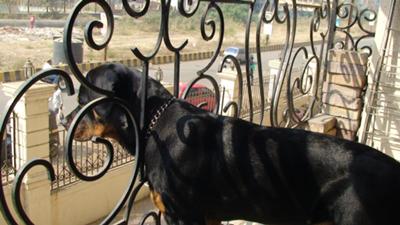 My 10 month rottweiler is very well socialised as he is brought up with children and even my 6 year old daughter can put her hand inside him mouth to drag unwanted things out of his mouth. he doesn’t close his mouth till she take out her hand, as if he know else it will hurt her.

he allow even other children in complex to pamper him and sit quietly when during walk some friends come across and let them pamper him , touch him on head etc.

even when come across other dogs in complex, and even if they bark at him and show aggression, he mostly doesn’t react back rather than just getting into alert position and stare at them back, (*Exceptional case is he react differently ,more in protection mode against other dogs barking at him , by barking back with his tail lifted straight high, when my younger daughter(6 yr) is with him)

The problems is nothing other than the kids cycle !!

the moment he see kids cycle specially with some adult pushing or holding the cycle helping the child to cycle, he get aggressive pulling the leash trying to get near the cycle. his attention is more on that cycle.

where as big children cycling around and even other cycles we had taken him near to observe he doesn’t react.

during my vacation I am planning to take rocky near to cycle and let him inspect himself there is nothing unusual and it’s not something harming that child !! as he is like children a lot and always want to play with children.

any other corrective methods or is there anything more serious in his behaviour ? which i could not understand?

Hi Girish
Great photo, Rocky looks like the king of his domain!

Some dogs just like to chase things, and bikes, skateboards and other object with wheels are always a good target. As Rocky only chases the bikes with small children on them, perhaps he is attracted by the noise their making as well as the wheels. The high-pitched voices of little children can trigger that prey-drive.

Also, as you suspect, perhaps their voices, plus the adults helping them AND the wheels is too much for him and he feels that they are in danger of some kind. I wonder if he acts this way around your smaller children and their bikes?

I think your idea of desensitizing him by giving him a chance to really get close to these bikes and to see that they’re nothing to worry aboutmay help. It may also be good to have your own youngest child ride a bike around him, perhaps with a relative or adult friend ‘helping’ so that he can become more familiar with this action.

I’m certain that you’re training him very well, but I’d recommend really working on that recall, so that if by any chance he ever manages to be free enough to chase after a small child on their bike, you can be certain he will stop and come back when called.

I’d also suggest that whenever Rocky gets excited or distracted in this way, that you call his name and get his attention and then as soon as he’s focused on you give him a tasty treat. If you do this every time, he will begin to associate these situations with you giving him a treat and will start to look to you and not focus on the bikes and riders themselves.

I’ve never had to deal with this issue, so if anyone else has and can offer any other tips and advice please use the comments feature below to do just that.

Good luck, let us know how it goes.