A Love Of RottweilersSami ,my best dog, just gone.. | A-Love-Of-Rottweilers 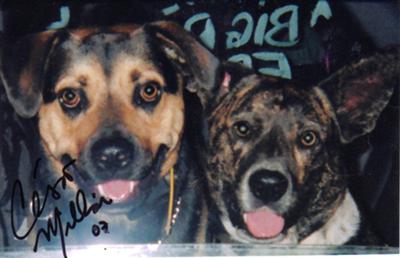 Sami and Brindle, with a famous autograph

Sami appeared on 12-23-2001 from nowhere as I was standing around the corner from my home in a quiet residential South Pasadena California neighborhood. I looked at him and it was as if a neon sign lit up across his forehead that said “Sammy”. I later changed it to Sami.

He was a Shepherd-Rottweiler mix, bones of steel of a Shepherd, the quietness and the steadfastness of a Rotty. A loyal, understanding, quiet, totally obedient, loving and handsome dog, whose beautiful eyes brought admiring comments from everyone everywhere we went.

Sami loved to lie on the couch with me with his head on my lap. He was quiet and sensitive to my moods. He was very used to routine, but smiled broadly and looked at me with a conspiratorial and knowing look when we varied routine in an unusual way. He was sometimes moody when not the center of attention.

Sami hardly ever barked- a Rottweiler trait, but he could not stand to be out performed by my happy-go-lucky Australian cattle dog who barked his comments about everything, and was quite a watch dog. Sami would chase and scare where my cattle dog would bark.

Sami was deathly afraid of getting into water at first; it took him three years before he would go in our local lake any further than his paws. My cattle dog was swimming way out to the middle to chase the ducks, while Sami was just thrilled to run after a stick on the edge of the lake’s waterline. But he loved to go to the dog park, and meet his doggie friends and to press his big head on thigh after they of his human friends to get lots of petting, smiling all the while.

He was in love with Geisha, a huge Akita girl, and whenever she approached, he would fall down and roll over on his side and become so absolutely still, that the first time I saw it I screamed because I thought he had died.

Last August I adopted a nervous ball-crazy little lab girl very demanding of attention, and not at all sensitive to Sami’s control of the house. They fought, but then things calmed down somewhat, still I spent time playing ball with the “lil girl” and our close relationship got triangulated to an extent. Sammy was 10 years old last month, and two days ago he actually did collapse. Sonograms showed a large inoperable tumor in his heart, and although the doctors tried to drain the liquid from his chest, to no avail. We sat with him as he lay in the quiet, darkened room on his blanket from home, and softly talked to him and petted him , until he was very, very relaxed and calm and slowly, slowly he drifted away.

We were very close. I miss him so. I wonder, did he die of a broken heart because I brought in that little lab that took away so much attention?

Linda – please don’t think that Sami died of a broken heart because I am certain that’s not true. You obviously loved him very, very much and gave him a wonderful life and I’m sure that he adored you.

A tumor doesn’t just appear out of nowhere, it’s a physical mass that takes time to grow, and most likely started long before you added your little girl. It’s natural for dogs to squabble at first when there’s a ‘new baby’, but they eventually grow to love each other and appreciate the canine company. I’m sure Sami knew that he was always your Number 1 and that you loved him.

You did everything you could for him and didn’t let him suffer, even though it broke your heart. Rest assured you did what was best for him, and he knew that. In time your heart will hurt less and you’ll be able to remember all the good times you had with him without heartbreak. Meanwhile let your little girl help you get through this with her own special brand of ‘doggie love’. Sami will be waiting for you at the Rainbow Bridge. God Bless