If you’re wondering if your Rottweiler pup is too small/too big or ‘just right’, this Rottweiler Puppy Growth Chart has the answers! 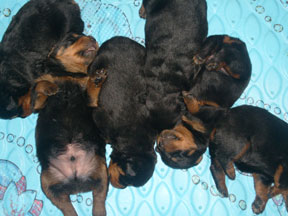 Rottweiler puppies are adorable little ‘butterballs’, but like any other breed they’re all individuals and can vary quite a bit in size, structure and personality. Although there’s no ‘one-size-fits-all’ formula for judging Rottweiler weight or growth, there are formulas that can help you reach some approximated puppy weight estimates.

You can use those as guidelines for evaluating your own pups’ development, and to get an idea as to whether or not he’s above (or below) the ‘average’….. but please remember there is no such thing as an average puppy.

Each and every one of them is unique and precious, how much they weigh is only important if there’s a health concern!

Rottweilers are big, powerful dogs, and many new Rottweiler puppy owners worry, fret, or even obsess, about their baby’s growth and weight gain……. usually needlessly.

This is when a having a Rottweiler puppy weight chart can really come in handy!

If you’re the proud owner of a new Rottie pup, it’s important to bear in mind that this is a large, slow-growing breed, and your little one won’t be considered ‘mature’ or fully grown until he (or she) is at least 18 months to 2 years old.

Some of these big dogs, especially the males, may not gain their full adult weight until they are 3 years old or even older.

It’s also very important to realize that there is NO HURRY for your pup to gain weight – in fact trying to make your pup ‘bulk up’ or trying to accelerate his growth often results in health issues such as bone/joint problems or even heart failure or disease.

Please remember that any puppy weight estimates are just that – ESTIMATES! And there is no such thing as an ‘average’ puppy (at least I’ve never met one), so use common sense and use the figures in the Rottweiler puppy growth chart below as a guideline – not the gospel!

I get many, MANY emails and submissions from Rottweiler owners who are much too concerned (read ‘worried’) about their pups weight, head size, height and so on.

They seem to get quite obsessed by how big their puppy, or dog, is and often that overshadows everything else. I always feel sad, and a bit frustrated, when I see this happening because a Rottweiler is so much more than just his size and/or outward appearance.

Rotties are absolutely awesome dogs and they have huge hearts, amazing personalities and are courageous, loving, goofy and totally loyal to their humans. These aspects of the breed should never be seen as secondary in importance to their size or ‘look’.

I think the hype surrounding Rottweilers is somewhat to blame for this obsession, but no one should ever buy a puppy of any breed solely for their ‘reputation’ or based on looks.

The Rottie you own is an unique individual, and the product of his genes. Chances are he won’t ever match the ‘average’ figures on this chart, so please don’t obsess over it, or worry that he’s too small, too tall or that his head isn’t big enough!

Just love him… and remember that this Rottweiler puppy growth chart is supposed to help you, not stress you out 🙂

At any given age there’s quite a wide range of possible weights, and your Rottweiler puppy could be on the lower end, the higher end, right in the middle, or even above or below the given figures.

Also realize they are not ‘sex specific’ and there can be a significant difference between the weight of a female and male pup at the same age. Females will generally be on the lighter end of the scale, males towards the heavier end. But not always, there are a lot of variables!

These are just puppy weight estimates.

If you’re concerned and want to keep a close eye on weight, get yourself a scale. They are relatively cheap and you can use it to make sure your dog maintains their weight throughout their life.

Average puppy heights are also subject to a fair amount of variation, so these are AVERAGES only. Most puppies will not be average!

Female Rottweiler puppies usually weigh consistently less than male puppies but when it comes to height up until about four months the girls may be slightly taller than the boys.

If you want to know how big your precious little puppy will be as an adult, you’ll need to do more than consult the chart above! 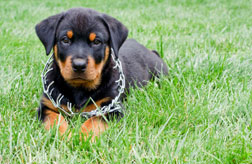 There are all sorts of things that factor into the eventual size/weight/height of your dog.

These include his/her bloodlines (genetic component), the size of his parents, metabolic rate, diet, activity level and more.

If we are talking averages here, then you can generally expect your pup to ‘top out’ somewhere between the weight of his parents.

The rottweiler puppy growth chart above shows a range of average puppy weights.

Sometimes puppy owners are so anxious to see their pup grow, that they are tempted to overfeed them in an effort to ‘speed things up’.

This is a very BAD IDEA, and can cause all sorts of long-term health problems (including damage to the bones/joints/ligaments, heart disease and other chronic illnesses)

If you compare a male and a female pup from the same litter, the male is likely to be towards the higher end of those figures, and the female towards the lower end.

If you want to keep your Rottweiler pup healthy, it’s important to be patient and allow him to grow and develop at his own pace!

Remember – Rotties grow and mature slowly, and the eventual height/weight of your pup is determined mostly by genetics.

But, making sure that he eats a premium puppy food, in the right quantities, will help him reach his maximum potential, and keep him in tip-top shape.

Do you want to know if your puppy is gaining weight at a ‘normal’ rate?

Or are you interested in learning additional methods for calculating puppy weight estimates?

Having difficulty converting your pup’s weight?

If so, there are a couple of other handy tips that you can use in addition to the Rottweiler puppy growth chart above.

Again, I must stress that these are ways of estimating rottweiler growth, and are based on average puppy weights.

So don’t expect them to be totally accurate, or get worried if your pup doesn’t seem to want to be ‘average’!

First, here are some interesting tid-bits about Rottweiler growth and development that you may not know….

Here are some additional handy ‘rottweiler puppy growth chart tips’ to help you figure out how much weight your Rottie pup should gain as he grows.

This inequality in his percentage gain of weight v height accounts for the awkward, gangly ‘puppy uglies’ stage that many adolescent dogs go through!

Enjoy your Rottweiler puppy while he’s small – believe me, he won’t stay that way for too long!

To see some photos that show the changes puppies go through as they grow and mature, check out my Rottweiler Puppy Pics page.

The puppies featured belong to visitors to this website who have kindly offered to share them with the rest of us Rottie lovers!