A Love Of RottweilersRottweiler pup still chases the cat! | A-Love-Of-Rottweilers 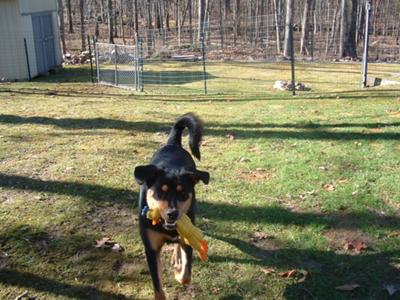 Bear and his favorite toy!!! a Rubber chicken

My husband and I adopted a Rottweiler puppy who was 5 months old then. He is now 10 months old and we have had him for 5 months. I have a 7 year old cat as well.

Bear the Puppy chases the cat still almost everytime she tries to walk anywhere. When the cat runs the dog goes after her. Bear the puppy never hurts her and the cat will turn and paw him. But the cat never uses her nails to hurt him either although the cat did bite him once.

It has been 5 months now is this normal or what can I do to stop the dog from going after the cat.

I have tried correcting him but he is to quick to catch. Please Help.

Hi Kathy
Rottweilers often have a pretty strong prey drive, but when they’re raised around cats they generally learn to accept them and call a ‘truce’.

From what you describe, Bear and your cat are sorting out their own relationship and it’s probably still a ‘work in progress’! Yes, do discourage Bear from chasing the cat and a firm ‘No’ and a little scruff-shake won’t hurt. But use a low calm voice and slow, deliberate movements. If you chase him around trying to catch him and tell him off, he’ll just think it’s all part of the game and get more excited.

As he’s never hurt the cat, and the cat really doesn’t hurt him (and certainly could if she wanted to!), then I really wouldn’t worry about this too much. I don’t think it’s only in our house that the cats usually get the upper hand in any argument.

As you didn’t get Bear as an 8 week old puppy and he may have never come across a cat prior to coming into your home, it’s not unusual for it to take a while for him to accept one. 5 months if a fair bit of time, but maybe not enough for this relationship to be entirely clear. Just give him guidelines and try to be patient, I’m pretty sure they’ll figure it all out between themselves eventually. Plus as Bear matures and becomes an adult he will have less energy and will be less excitable so this chasing should wind down somewhat.