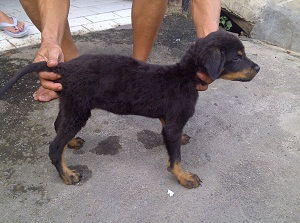 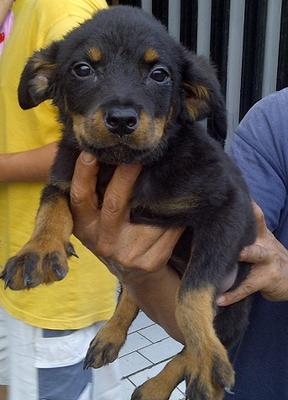 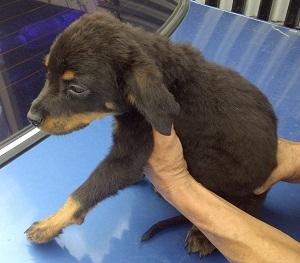 I purchased Piolo from a friends friend. I was told that he is a purebred Rottie. I live in Indonesia and pedigree certifications can take months and so I don’t have papers for Piolo yet.

He is an adorable and amazing puppy. However, I have noticed that he seems underweight and short for his age. He is about 5 months old and is about 18 inches tall and weighs around 40 pounds. I have seen 2 different vets and they too have mentioned that he is small for his age.

I know that a number of factors determine a puppy’s growth such as bloodlines, health and diet. From what I’ve read Rotties are also a slow growing breed but I’m just concerned about his development. I’m worried that it could be some health related issues that is making him grow slowly.

I don’t have any current photos of him at the moment but here are a few that the breeder sent to me before I purchased him. I was told he was around 2 to 3 months old in those pics and even then he looked scrawny and tiny. I only realized this after looking at other Rottie puppy photos.

Is his current size still considered normal or should I be worried? Any feedback or advice would be wonderful.

Hi Ray. I would definitely say that in these photos Piolo looks underweight, I’m guessing he was maybe around 8 weeks in those photos and puppies of that age should be chubby and ’rounded’, regardless of breed.

I’m guessing he didn’t get the nutrition he needed and that’s why he was so scrawny. It would be very helpful to see photos of him now in order to see if he looks at a healthy weight for his frame, even if he’s below-average compared to others of his breed. Each pup is different and health is much more important than size.

Only legitimate, truthful registration papers can prove purebred bloodlines, but it is possible for unscrupulous breeders to be less than truthful and give ‘purebred’ status to pups who have some mixed blood. It’s impossible to say if this is what’s happened with your puppy because he looks very thin and underweight and that can completely change how a puppy looks overall.

As long as you have him on a healthy, nutritious diet (this page has lots of info. on feeding large breed pups in locations where quality commercial foods are hard to find, or when a home-made diet is preferred… Feed Program For Overseas, and he has had all his necessary vaccinations, parasite control and regular health checks, then he should be healthy overall.

Adolescent pups are often a bit out of proportion and ‘leggy’, it’s natural at this age. Piolo is a bit below average in terms of weight for a 5 month old Rottweiler, shorter too, but as you don’t really have any genetic background on him, know what his parents look like, or even have proof that he’s a purebred Rottweiler, it’s impossible to say why that is.

If you’re worried about his health, I’d definitely recommend having your vet give him a complete check up to make sure all is well. Parasites, infections or other underlying health problems can cause a pup to be underweight, but only your vet can tell you if there is a problem.

BUT, if Piolo is a happy, active puppy who seems to be healthy but simply a bit smaller than you would expect then I wouldn’t worry too much. He may or may not be purebred, he may just be smaller-than-average due to his genes, or he may be a ‘late bloomer’. No one can really say. But as long as he’s healthy then just enjoy him for the special boy that he is and don’t be overly concerned about his size – Sue