A Love Of Rottweilersrottie became aggresive with daughters friend. | A-Love-Of-Rottweilers 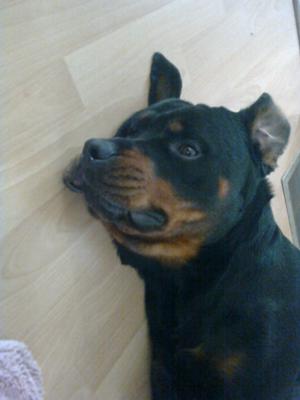 Recently my 10 year old daughter had a friend sleeping over and in the middle of the night the girl woke up and came downstairs to get a drink. (This was the first time this girl had ever been in our home.) My 2yr old rottie (Zues) jumped out of his bed and took off when he heard someone moving around. He was growling, but when my boyfriend yelled the German command that only himself or I use, he stopped in his tracks and come to us.

The child was very frightened but completely unharmed. My question for you is did we do the right thing by not correcting him? In my eyes he really wasn’t doing anything wrong. He smelt a strange person in our home and reacted the way we want him to…. But on the other hand I question what if he would of gotten a hold of her?? How do I get him to better know when that type of aggression is ok?? He is a very loving dog but very protective of his family(as the breed is).

I love my dog very much and if something bad happened because of something I did or did not do with him, it would break my heart..

Hi Charlotte
In my opinion both Zues, and you and your husband, behaved exactly as you should have done.

Any dog would be likely to react in the same way Zues did if they heard someone moving around in the middle of the night, especially if they were aware that it wasn’t a family member.

Although he was growling, I doubt very much that Zues would have ‘got hold of her’ or anything like that, even if your husband hadn’t been as quick to react as he was. Most likely as soon as he realized who it was he would have started wagging his stumpy tail, Rotties don’t tend to ‘jump in’ and attack unless thoroughly provoked. They’re more likely to intimidate with their size and voice, corner to ‘opponent’ and wait to see what happens.

The fact that your pup responded immediately to your command shows that he respects your authority and has been trained well. If I had been in your shoes I wouldn’t have reprimanded him either, as you say he was simply moving to protect his family which is exactly what you would expect him to do. Growling is a dog’s early warning system and a natural behavior.

However, for future reference I would make sure that visitors in your home are introduced to Zues and encouraged to interact with him so that should this situation arise again he will recognize them right away as friends, and not combatants. Also advise visitors not to wander around your house at night if at all possible, or if they do to make sure that the lights are turned on and that they acknowledge his presence and talk to him if he appears.

I’m sure the child was scared (we all would be in that situation. I’ve been faced with charging Rottweilers – not my own – and even with years of experience of the breed, it’s a very intimidating experience!), but hopefully she was also able to interact with Zues on a friendly and relaxed basis so that she won’t be afraid of him, or his breed.

I think you’re doing a great job with him and he’s a very lucky boy.