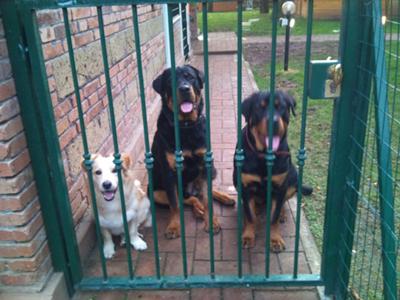 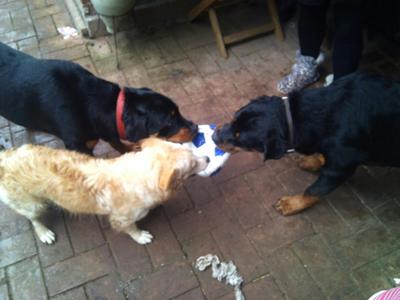 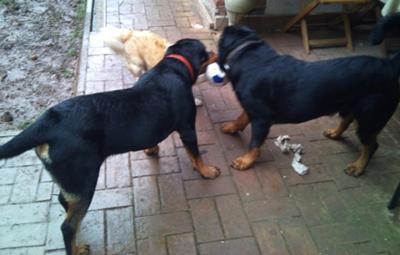 Here are some recent pictures of my friendly, sweet, lovable teddybears.

We have had ronnie since she was 8 weeks. She doesn’t understand that not all people want to say hello to her! We had so many visitors when she was a tiny pup, and many at a time over the summer so ronnie LOVES people.

She’s very good with other dogs too! At the beach, the tiniest dog ran at her jumped and bit her on the nose. If she could talk, i’m sure she would have said ‘mum, why did that doggy do that to me’.

She is a very confident. I think she thought she was going to play school when she went to the vet, they all fussed her, so she’ll be quite happy to return. She has a bitchy side mind , especially to her brother! I’m glad when she falls asleep sometimes! Such an attention seeker she is and a messy one too! She’s either chewing, playing, attention seeking, bitching her brother or sleeping. But we all find ourselves saying ‘awww’ to her cute, puppy face and she knows it!

We weren’t planning on having two rotties but ronnie’s previous owners asked us if we wanted him when he was 5 months old.

We had him on 1st august so just enough summer left for him to meet and live with our visitors. He is so sweet and calm, loves ronnie, even when she’s being bitchy to him. He rarely reacts but ronnie knows when she’s pushed him too far. just a growl stops her.

We nearly lost him to a virus, even though he had all his jabs! The vet said the jabs do not cover all types of parvo (he wasn’t completely sure what virus he had). He spent four nights in 24hr hospital and had heat lamps on him as his temperature was dangerously low. Our handsome man pulled through thank goodness!

He can be friends with other dogs as you can see in the picture. But he hasn’t had the experiences at a very young age, like ronnie, he is more wary.

Ronnie gets through bones very quickly, Charlie gets bored with his so ronnie nicks it at the first opportunity. Charlie will pick up a bone (if ronnie eventually puts it down ) he doesn’t really want it but they look at each other teasingly. They are very funny together. What one gets the other gets! No room for jealousy in our house!

It’s been a nightmare this week: ronnie’s been sterilised. She has to wear a lampshade (she froze on the spot when we first put it on!) she wouldn’t move for a while (poor girl was scared to death). She’s back to her crazy self, apart from the lampshade, she’s used to it now lol. Still awful keeping them apart when they so want to be together!

Sorry for rambling on but we are talking about my babies after all!