Making sure that you get the right puppy vaccinations, at the right time, is one of the most important things you can do to keep your new pup healthy and happy. 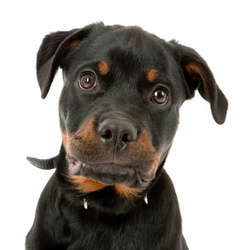 Did somebody say ‘shots’?

There are several common, contagious canine diseases that unvaccinated puppies are vulnerable to, and these diseases KILL puppies like yours every single day.

For example, if a pup catches Parvo (Canine Parvovirus) before she’s had all her puppy vaccinations, she has less than a 20% chance of recovery.

When it’s a Rottweiler puppy, the chances are even slimmer because this breed is especially susceptible to this particular illness, and is likely to be severely affected.

Rotties are one of the breeds (which also includes Pit Bulls, Doberman Pinschers and other similar black-and-tan breeds) which succumb easily to Parvo and are more likely to die from it.

And Parvo isn’t the only disease you need to worry about. Distemper, Parainfluenza, Hepatitis, Leptospirosis, Coronavirus and, of course Rabies, are all real threats to your puppy.

Your puppy is the love of your life, and of course you want to protect her and keep her safe, so keep reading and you’ll find out everything you need to know about puppy vaccinations……

The Timing Of Puppy Vaccinations

I’m going to start with the when of puppy shots, as it’s pretty important to get your timing right.

Puppies get a natural immunity to diseases that their momma has been vaccinated against, during their first few days of life.

This immunity is transmitted throught the colostrum (sort of pre-milk) their momma produces in the first 48 hours after giving birth.

It’s fairly short-lived protection, but researchers haven’t been able to put an exact time-frame on it.

They do know that the antibodies that the pups receive stay in their bloodstream for several weeks, and that they gradually become weaker and less effective as time passes.

When these antibodies are above a certain level they prevent a vaccine from being effective, basically canceling out any puppy vaccinations given at that time. This seems pretty straightforward, but it gets more complicated at this point!

As the antibody levels in the puppies blood start to fall, so does their level of protection against disease.

The problem is that there is a period of time where the antibody levels are too low to give the pup adequate protection against disease, but too high to allow canine vaccines to be effective.

This is the critical point when puppies are at high risk, but it’s impossible to tell exactly when it will happen. It can vary from breed to breed, from litter to litter, and even from puppy to puppy, and it could last a couple of days, or a couple of weeks.

This is the reason that puppy vaccinations are given several times, rather than just once.

A vaccine protocol like this is the best way to make sure that your puppy doesn’t spend any longer than absolutely necessary in that ‘in-between’ stage when she’s not properly protected.

By following this sort of vaccination schedule and keeping her puppy shots up to date, you are giving her the very best chance of staying healthy.

To have the best possible chance of a vaccination ‘taking’ and giving your pup the immunity he needs, it should be given three separate times… at three week intervals.

You can find out which vaccines are given when HERE

Which Puppy Vaccinations Does She Need?

There are certain canine vaccines that are considered ‘core’ vaccines (the necessities) and others that are optional.

Whether or not your puppy needs any of the optional puppy vaccinations may depend on what part of the country you live in, whether or not she will be in contact with many dogs (in a kennel or boarding facility for example) and so on.

Generally the core vaccines will be given as a ‘combination shot’, so your puppy gets 4, 5 or 6 different canine vaccines in one injection.

The actual vaccines included in a combination shot can vary from veterinarian to veterinarian and from location to location. I’d recommend discussing this with your vet so that you know exactly what your pup will be getting.

The following puppy vaccines are often considered to be ‘core vaccines’ and some, or all, of them may be given as a combination shot :

The canine vaccines that are thought of as optional include :

Leptospirosis isn’t necessarily a ‘core’ vaccine, but in the USA it’s usually recommended for the majority of pups/dogs. Veterinarians now recommend that it isn’t given until after a puppy is 12 weeks old to prevent complications or severe allergic reactions.

Bordatella can be given as a shot, or as nasal drops. The drops become effective more quickly and one dose is enough. The shot needs to be given twice, at a 3 to 4 week interval, and takes a bit longer to become effective.

This vaccine is not thought to give full protection for more than about 6 months, so if your pup/dog is kenneled regularly, attends doggie-daycare or is around many other dogs on a regular basis you may want to have a booster dose given twice a year rather than annually.

The Rabies vaccine is required by law, and is usually given somewhere when your puppy is between 12 and 16 weeks old.

You can learn more about the most common canine illnesses and their symptoms (including all of those mentioned above), on my Dog Diseases And Symptoms page.

The exact puppy vaccinations schedule that your veterinarian will follow may well vary from this sample, because professionals and practices often have their own, preferred protocol. But it will give you a good general idea of when you need to get your puppy vaccinations set up.

Because your Rottweiler puppy is especially vulnerable to Canine Parvovirus, you need to give her a fourth Parvo shot when she’s around 16 weeks old.

As it’s best for a puppy to be at least 8 weeks old before she leaves her momma, your pup should have had her first set of shots (at a minimum) before coming into your home.

All responsible breeders make sure that the puppy vaccinations for their litters are done on time, and kept current.

Once you have bought your pup, it is your responsibility to make sure that the vaccination schedule recommended by your veterinarian is kept ‘on track’.

Many puppies have no noticeable reaction at all to the vaccines, apart from maybe objecting to the actual needles…. and, interestingly, I often find that the biggest/strongest boys are the biggest cry-babies 🙂

But, as there are a whole range of possible side effects or reactions that your puppy may experience, it’s a good idea to be aware of these and know when you need to consult your veterinarian.

The most common reactions are mild, and include :

If you notice any of these symptoms, don’t panic, but do keep an eye on your pup. If any of them last more than 24 hours (with the exception of a single swelling or lump at the site of the shot itself), call your veterinarian and ask his/her advice.

More serious reactions to puppy vaccinations are usually seen as allergic reactions. They most often occur within a few minutes to an hour of your puppy receiving the vaccine. They can include :

These sorts of reactions are serious and you need to get veterinary help right away if your puppy develops them. They don’t usually happen after the first set of puppy shots, but may be seen after second or subsequent vaccinations.

If your pup does have this sort of reaction, she still needs to have the remaining sets of shots, but talk to your veterinarian about it.

Although the potential for a reaction applies to all puppy vaccines, some of them seem to be more likely to trigger allergies. These include the Leptospirosis and Rabies vaccines.

Although Rottweilers are not especially sensitive to any particular vaccines, some breeds are. These include (but aren’t limited to)… Miniature Dachshunds, West Highland White Terriers, Old English Sheepdogs, Akitas, Portuguese Water Dogs, Weimaraners and Harlequin Great Danes

So now you know pretty much all there is to know about puppy vaccinations, so you’re all set to protect your Rottweiler puppy. Good luck!