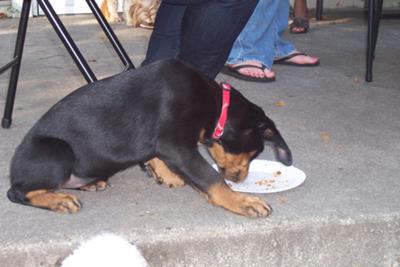 I have a two year old girl – She’s my first and I had her since she was 8 weeks. I live alone (w/an old cat) and thought to get a dog for companionship and protection.

I’ve never raised a large guard type dog before and researched this breed prior to acquiring her. Everyone I spoke to and everything I read stressed ‘socializing’.

Thus begin socializing- I took her everywhere with me – visited friends/family, Pet Smarts/Petco, car dealership/repairs- we did formal obedience training, arranged puppy play dates, doggie daycamp, she even attended a puppy birthday party. I think I over did it with the socialization business. I believe I’ve turned her into the sweetest, friendliest, most playful and very affectionate dog ever. She’s friendly to other animals as well as people. Everyone that crosses her path she wants to play with. She’s never, ever shown aggression to any one. She’s just too happy when strangers (workers/repairmen) come to my house/yard.

I love my dog to death and I know she loves me – she’s definitely covered the companionship business – she keeps me laughing and I would not trade her for a million bucks. But I am a bit concerned about her protection abilities. Should I invest in another dog to cover that area?

Hi Moe-Slow
My personal opinion on this is ‘No’ :o)

You’ve done a great job of socializing your dog and I only wish that every Rottie could have the same opportunities, it would do wonders for this breeds reputation! This does not take away her natural desire to protect you, that’s hard-wired into her brain and if she felt that you were threatened or at risk I have no doubt that she’d defend you. With her life.

Most dogs of any breed will protect their owners if they’re under threat, but their ability to protect (imagine a dachshund for example) is limited by their size and to some extent their inherent breed-specific tendencies. A Rottweiler is capable of following through on that desire and that’s why socialization and raising a well-balanced dog is SO important. They must never be indiscriminately aggressive, or fearful and so on, as the risk of serious trouble is too high.

Dogs have a heightened perception of emotions and situations, and if you were afraid of someone or they were behaving in a threatening way towards you…. or someone came into your house unannounced in the night… then I am confident that she would do what was necessary. Rotties don’t bite unless it’s necessary, but tend to use their size and strength to ‘corner’ or intimidate, a well-bred, socialized and trained Rottweiler is a discerning guard-dog and that’s what you want. Not one that goes off ‘half-cocked’ as it were.

One point here to note is that this ‘sixth sense’ should be taken seriously. If your girl loves everyone, but one day decides that there’s a particular person that she doesn’t like, or is suspicious of… take heed. This doesn’t mean they’re a criminal or serial killer, but there’s probably something about them that’s triggering your dogs’ reaction and I would trust that instinct over mine any day!

I don’t personally know your dog obviously, and I’m sure there are exceptions to the rule now and then, but I seriously doubt that your girl is going to let you down in that department if (and hopefully you’ll never be put in that situation) you are under threat. If she was a cowering, fearful, over-submissive dog, then possibly she’d try to run rather than defend you, but it doesn’t sound as if that’s the case. And even then, a dog like that can be very unpredictable and may attack for no good reason in reaction to a ‘perceived’ (but non-existent) threat because of their fear.

Unless you are seriously involved in Shutzhund or protection training, an owner shouldn’t try to raise a Rottie (or any other breed) as a guard dog because encouraging that trait is just too likely to lead to trouble in inexperienced or improper hands. The instinct to guard is INSTINCTIVE and a dog knows when to use it. Trying to encourage it, or to socialize less and so on in an attempt to have a protective dog just confuses the dog and interferes with that instinct.

I hope this helps put your mind at rest. Best of luck to you both.