Did you know that being able to recognize Parvo symptoms quickly could literally save your puppy’s life?

Well it’s true, and I’m not exaggerating or being overly dramatic. 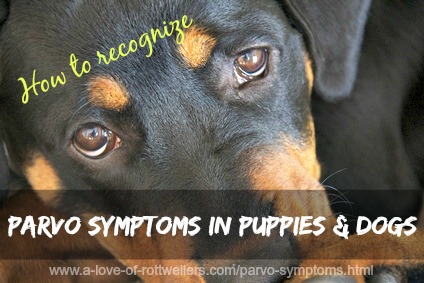 Parvo virus is one of the most contagious and deadly canine illnesses around, and it can be a death sentence for young, unvaccinated puppies.

If left untreated, these can progress very rapidly and can kill a puppy within 24 – 48 hours.

Rottweilers are just one of the breeds who are especially vulnerable to this horrible disease (German Shepherds, Doberman Pinschers and Pitbulls are among the others).

Unvaccinated puppies who don’t get immediate veterinary care may have as little as a 20% chance of survival, for Rottweilers and other susceptible breeds, the odds may not even be that good.

There’s definitely no time to ‘wait-and-see’ with this disease.

The best way to protect your pet is to make sure that he’s had all of his vaccinations!

But even then pups can be exposed to the virus without knowing it before the vaccines take effect, this is true for older dogs too.

If you can get an infected pup or dog prompt veterinary help, it can increase their chances of recovery pretty dramatically. Not all will survive even then, but it’s their very best chance.

Recognizing parvo symptoms quickly is the key to survival.

Here’s what you need to know.

These are the most common symptoms of canine parvovirus.

Your pet may only show one or two of them at first, but generally all will be seen in a puppy who is infected.

Bear in mind that this disease moves FAST! A pup or dog who seems only mildly unwell in the morning, could be seriously ill by bedtime.

Diarrhea is usually the first symptom of Parvo, but not always. Vomiting can precede it.

You might see red streaks of blood in it at first. As the disease progresses the diarrhea becomes darker (blood from the damaged intestines/colon).

Fluid loss like this triggers dehydration which is a big problem all by itself.

This is the second most common symptoms of Parvovirus.

It usually comes on soon after the diarrhea has started, but some pups vomit first.

You might see food in the vomiting at first, but it quickly becomes repeated vomiting or retching/gagging.

Because your pet can’t keep anything in his tummy, what he’ll be bringing up may be mostly foam or liquid very quickly.

This increases the risk of dehydration.

These aren’t the most obvious parvo symptoms at first, but becomes more noticeable fairly quickly as the fluid loss increases and the virus takes hold.

A puppy or dog with Parvo often acts as though he’s completely exhausted – which his body is!

He might show interest in a tasty treat (but vomit it back up) or try to play/interact with you, but chances are he’ll be unable to walk, or even sit up, for very long.

All he’ll want to do is curl up and sleep, and he’ll look thoroughly miserable… because he feels awful.

Puppies or dogs with parvo usually can’t even be tempted to eat a tasty treat, let alone their regular food.

Even if they do manage to force some down, chances are it will come right back up again very quickly.

It’s really impossible to tell if your pup or dog has a fever just by looking.

But if he’s showing any of the symptoms above, he is almost certainly feverish as well.

A dog’s normal body temperature is higher than a humans (between 101 & 102.5). Anything over 103 Faranheit is considered a fever.

The main parvo symptoms of diarrhea, vomiting and fever, combined with other internal effects of the virus, cause rapid dehydration.

This alone accounts for the loss of many Parvo victims because it causes organ failure, shock and death.

Signs of dehydration in dogs include sunken eyes, dry gums (feel like rubber rather than their normal ‘slimy’ feel), skin which has lost it’s elasticity.

You can check skin elasticity by pinching some of the skin at the scruff of your dog’s neck between your fingers. When you let go, if it doesn’t immediately slide back into place, he’s dehydrated.

There is another strain of parvo in puppies which can attack the heart muscles rather than the intestines.

This is most often seen in very young puppies (under 8 weeks old), and can cause sudden and unexpected death, usually without the typical Parvo symptoms.

Dehydration comes on quickly due to the build-up of other symptoms, so it’s usually seen several hours after onset.

If your pup gets to this point without veterinary help he’s already in big trouble.

In addition to the symptoms that you can see, there are other things going on inside your puppy…..

The ‘enteritis’ (intestinal) form of Canine Parvovirus attacks and kills the cells lining your pups intestines, and prevents him from being able to absorb nutrients or fluids.

It also lowers the white blood cell count, and attacks the lymph nodes and bone marrow.

This causes sepsis, shock, acute respiratory distress and other symptoms.

More about diarrhea in puppies and dogs….

Parvovirus is not the only cause of diarrhea in puppies or dogs. It can happen as a result of stress, dietary changes, parasites and other illnesses.
However, if your pet is having repeated episodes of diarrhea, and shows ANY other signs of being unwell, it’s vital to have him/her examined by your vet right away to rule out parvo or other serious illnesses.

Check out my Dog Diarrhea page to learn more.

Parvo is a virus, so there is no ‘cure’ as such, BUT getting IMMEDIATE veterinary attention for a pup showing parvo symptoms can make the difference between life and death….. every minute counts here!

The rapid and severe dehydration, blood loss, sepsis, and organ damage caused by Canine Parvovirus is usually fatal if not treated right away.

So, I really can’t stress this enough……

If your pup or dog is showing symptoms of Parvo, get him to your veterinarian immediately.

If it’s after hours, weekends, or your regular veterinarian isn’t available, get him to the nearest 24 hour animal hospital or emergency pet clinic.

Intensive, supportive care is the only way to give your pet a fighting chance at beating this disease.

Your veterinarian can detect Parvo by examining a stool sample from your puppy, this is the quickest route.

Blood tests are also available, and aren’t going to show a false negative (which stool samples sometimes do) but they take longer to analyze. Your vet may do both.

Learn more about Canine Parvovirus on my Parvo In Puppies page

Read about one Rottweiler puppy’s fight against this horrible virus, and how she won, here… Angelika’s Story