Panosteitis is the correct name for what is often called ‘puppy growing pains’. 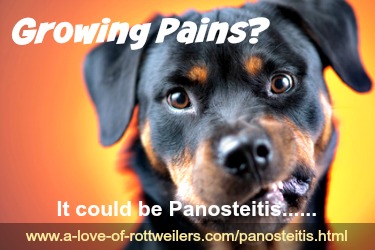 It’s most often seen in large and giant breed puppies who are between 6 and 18 months old.

Male puppies are up to 4 times more likely to suffer from this canine bone condition than female pups.

The symptoms usually ‘come and go’ and may last for a month or two, or six (or even a year or more).

BUT, on average, a pup will only experience (acute) symptoms for around 2 to 3 months.

The classic pano growing pains are caused by inflammation in the rapidly-developing long bones of a pup’s legs – most often in the front legs, and around the growth plates.

It’s often referred to as a ‘spontaneous and self-limiting’ condition.

Basically what this means is that the inflammation and pain appear without any obvious ‘trigger event’ or underlying illness, and disappear of their own accord after the disease has ‘run it’s course’.

Many experts can’t agree about what actually causes the inflammation and joint pain, but it is real condition and a fairly common one.

Certain Breeds Are More Likely To Suffer From Pano

Panosteitis is usually seen in large-breed pups, but some breeds are more likely to develop it than others.

Although the above breeds are more likely to develop growing pains, any large or giant breed pup is at risk, as are large or extra-large mixed breed puppies (many of whom will have one, if not more, of the breeds listed in their family tree).

Pano can appear out of the blue, and usually does. Most often there’s no obvious reason for it either.

However, veterinarians and researchers have several theories about what causes Panosteitis. These include:

The inflammation which causes the pain of Pano could be caused by any one, or combination of several, of these factors.

Research is still being done to try to get more information and a definitive answer to this question.

The Symptoms of Panosteitis In Puppies

Symptoms of this condition are the classic ‘puppy growing pains’, and usually appear suddenly and ‘out of nowhere’ with no injury or apparent cause.

The most common symptom of Panosteitis is limping or lameness.

This is usually intermittent, last anywhere between a day and two weeks, and may affect one, two, or all your pups’ legs at one time or another.

There is usually discomfort, or pain, accompanying this lameness or limping, and you may notice it more when your pup has been sitting or lying down in one position for a long time and gets up or starts to move around.

Limping may be more severe after exercise too, and your pup may show a lowered level of activity and even seem ‘lazy’ at times.

Sometimes there is a noticeable swelling of the leg joints.

In canine pano, the most painful area of the bone is usually the center (midway between joints), rather than the joint itself or the extremity of the limb.

Although not as often seen as the above signs, other symptoms of Panosteitis can include:

Your veterinarian can make a diagnosis of Panosteitis from the symptoms you describe, a hands-on exam of your pup, and X-rays which should show signs of changes to the bones caused by this condition.

Although it’s painful and can last for quite a long time, Panosteitis in puppies is almost always a ‘self-limiting’ condition – in other words, it gets better by itself eventually! Luckily there are also generally no long-term effects.

But, there are things that you can do to help your puppy feel more comfortable while he’s experiencing these growing pains.

Anti-inflammatory medications and corticosteroids can help reduce swelling and inflammation, and in some cases pain medication for dogs such as Rimadyl may be prescribed. Painkillers such as Aspirin is also often used to treat Pano in puppies and reduce discomfort.

However, only give your puppy medication that has been prescribed or recommended by your vet. Never try to medicate with human products such as Advil or Tylenol as these are dangerous for your pup, and can even be fatal.

To learn more about the safe usage, and possible side-effects, of giving Aspirin to your Rottweiler, check out this webpage… Aspirin For Dogs.

Your Rottweiler puppy, or whatever breed you own, needs plenty of rest to help his bones heal. It’s a good idea to reduce his exercise levels and don’t allow him to put too much stress on his growing bones/joints as that will only make the situation worse.

Making sure that you feed your large breed puppy a food that is specifically formulated for his unique dietary requirements can help to reduce bone and joint problems such as Panosteitis.

For pups with pano, you really want a dog food on the lower end of the protein scale, and don’t overfeed as an excess of protein seems to make things worse.

This is a very important element of puppy care with large and giant breeds.