by Brent
(Indpls, IN Marion) 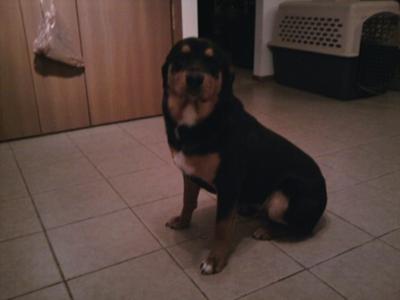 My Rot will be 2 yrs old in July 2012. Once he was 6 months old and potty trained, I stopped caging him. I restrict him to the kitchen/dinning because that area is completely tiled.

Lately, my Rot Bear has started to chew on the window seal, pull down curtains, chewing things off the refrigerator (pics & stickers).

These are habits he never had or did before. Any advice?

Hi Brent
Bear is coming up on adulthood but he’s still a teenager in many ways and this period of development can be pretty challenging.

Many pups revert to puppy-like MISbehavior, and test the limits, challenge authority and generally ‘act out’. It’s pretty normal but can be very frustrating for their owners!

The best thing to do when this happens is to go back a bit in terms of training approach. Crate him more if he is being destructive when left alone, supervise him more closely when he’s not crated and be sure to correct him firmly, but lovingly, if he misbehaves.

He needs to know that the rules haven’t changed and neither has what you expect from him. Be consistent, patient, and lovingly firm, and he will grow out of this phase given time.

If there have been any major changes in your family or home recently (such as a new pet, new baby, divorce, death, house move etc. etc.) it’s possible that this has triggered Bear’s behavior patterns as well.

Dogs react to stress by chewing and the anxiety can make them a bit ‘hyper active’, in the absence of enough exercise this can turn to destructive behavior (even WITH lots of exercise, an anxious dog who’s left alone may rip things up though).

If you think this could be a factor just try to keep Bear’s routine as close to normal as possible and be patient with him while he adjusts to whatever ‘newness’ is around him.

Hope this helps, best of luck. Bear looks so adorable, as though he couldn’t possibly do anything wrong 🙂