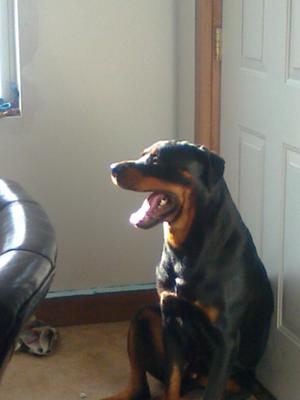 We have been having this problem with Zues for a little while now and not sure how to fix it.

Zues loves to go in the truck but when we take him he does not put his head out the window like most dogs. He drools all over the window and door, licking the window. Sometimes he barks and growls at (I think )the lines on the road.. I want to be able to take him with me when I leave, but it is becoming a huge distraction while driving..

Hi Charlotte
This is a tricky one, but probably something that will get better as Zues becomes more used to being in the truck.

He is probably doing this because he gets a bit anxious and maybe a bit motion-sick too. Drooling is often seen in a dog who’s nauseous, although you don’t mention him vomiting which is good!

You could try putting him in a doggie seat-belt/harness in the middle of the back seat so that he can’t actually get to the windows, that may help.

If you have some ‘bitter apple’ spray you could treat the window and door with that, as Zues wouldn’t like the taste and it may stop him licking so much, probably won’t help the drooling though.

There are natural products that help to reduce anxiety in dogs and if you think he’s a bit stressed out by the truck you may want to try one of them. You can see a selection here … Natural Remedies For Dogs.
Other than that I honestly think it’s probably just going to take time and lots of truck rides for him to calm down and start to relax when you’re driving.

It’s actually not a good idea for a dog to stick his head out the window as he can get stuff in his eyes, or hit his head, or even try to climb/jump out, so perhaps Zues knows what he’s doing.

If anyone else has any good tips that could help Charlotte, please feel free to use the ‘comment’ function below to share them.