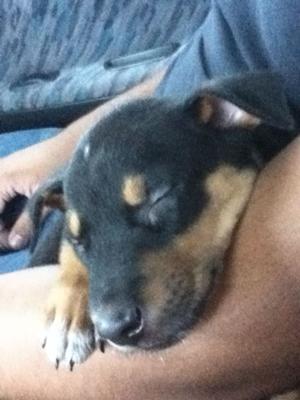 I have a rottweiler puppy. i really dont know how old he is because i just saw him in the streets shivering from rain but judging from his color and pattern i say he is a rottweiler..

there are white patches covering like 8% of his body from under his chin to his chest and some small parts on his paws and a tiny part like few white hairs on his forehead..

does this mean he may be cross bred between a rottweiler and a mongrel? or is he sick? im worried.. im looking forward for your reply.. thank you very much

*i uploaded a photo of him maybe you can identify his breed? i was not able to get a photo of the white marks though..

Hi Jamie
Many breeds have the same black and tan coloring as Rottweilers, and so do mix-breed dogs, so it’s impossible to tell a pup’s heritage that way.

Depending on the size of your pup it’s perfectly possible that he has Rottweiler blood, even that he’s a purebred Rottweiler, but it’s impossible to tell from photos too.

Sometimes white hairs or patches appear on purebred Rotties, and go back to the very beginnings of the breed having been passed down in the genes. However, they generally just appear on the chest, or on the paws, and shouldn’t be very small.

This poor little guy has obviously had a fough start in life and needs a lot of TLC and someone to love him. I hope he’s found his new home with you, regardless of his breed heritage.

Whether or not he’s sick is also impossible for me to judge, but you will need to have him evaluated by a vet right away because given his difficult start he is unlikely to be up to date with veterinary care and he will need his puppy vaccinations and deworming at a very minimum.

He looks like a lovely little pup and I wish you the very best of luck with him. I hope he gets to enjoy a long, happy and healthy life.