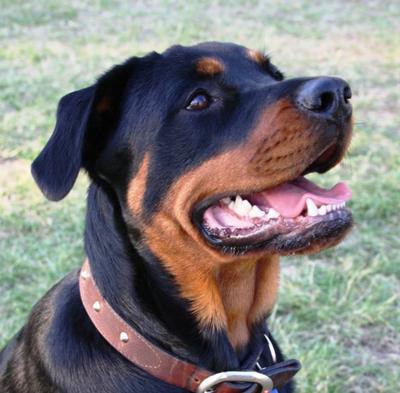 Hi i have a rottie 6 months, he is quite a smart dog the only problem is that he is peeing inside a lot, also my roommate has a chihuahua that pees on a pee pad.

I don’t know whether this is because he has to pee or because he wants to mark his territory, either way we are both getting very annoyed at him but we still love him and take him to parks, he just seems to pee inside that’s the only problem, do you know anyway to stop this?

Hi Mikee
As your pup is a male and 6 months old, I would guess that he’s ‘spraying’ to mark his territory, rather than actually needing to pee. That is assuming that he’s housebroken already.

If he’s not been neutered yet, then I’d recommend having the surgery done soon, once a pup has started spraying it won’t necessarily stop the problem, but it will help. If your room-mates dog is also a male, then that could be escalating the situation as the scent of his urine in the house will trigger your pups’ natural desire to overwrite it with his!

Of course you still love your dog, and this isn’t a case of him being a ‘bad dog’, it’s a totally natural behavior and he has no idea that it’s not okay. You do need to begin to correct him when you see him lift his leg though. Tell him “NO” firmly (but don’t shout or scare him), you can also give him a GENTLE shake by the scruff of the neck as you say ‘no’, that will help reinforce the correction.

As he’s quite young, and presumably this is a fairly recent behavior, you should be able to correct it with time and patience. Meanwhile to protect your furniture and rugs you could try using ‘belly bands’ (sort of like doggie diapers) to catch the urine while he’s learning.

Hope this helps, best of luck with your pup.