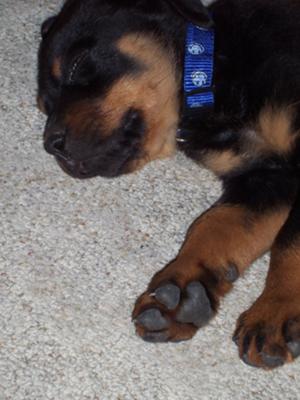 jeezy is about 2 months in this picture

im just wondering if there may be something wrong with my rottie. because hes constantly bumping into things it’s either his head or his rear end that he’s bumping mostly his headd though.

And he’ll get up and play, eat his food, or drink his water then he just plumbs down (falls) to the floor he’s 4 months old today june 22 2010 so is this normal for rottie’s he’s the first rottie i ever owned.

Hi Kim
Yes actually Rottweilers do tend to be a bit clumsy as pups and adolescents, and the bigger males seem to be the worst in this respect!

They’re big, fast growing pups with heavy bones and big paws, this makes them prone to bumping into things. They can be very awkward during this adolescent stage but eventually grow out of it.

As long as Jeezy is happy and healthy otherwise I wouldn’t worry about this at all. Best of luck with your adorable pup.