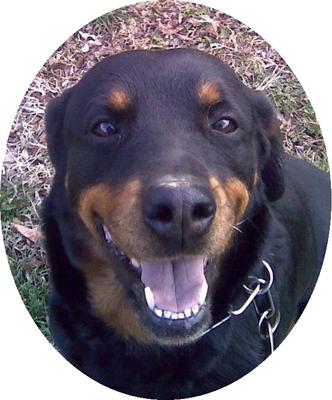 Poor girl, such a stagnant life. 6 years old and a kennel dog for the entire time. Never spayed, ears never cleaned, nails never clipped, not wormed and not on heartworm prevention, and the most devasting thing for her — no socialization.

One of my old rotts had gone to the Bridge, and I was looking for another girl to keep my 9 year old male company, but didn’t want a young dog who would want to constantly play. The rott rescue I had adopted my last two wonderful dogs from didn’t have anything to fit my situation, so I went to a popular website that specializes in all kinds of pet adoptions and naturally found thousands of dogs needing homes.

The facility that advertised Panzer (I changed her name to Panzer from another name that I didn’t think suited her), looked like a nice place, and when I visited, everything was neat and clean. Of course there were red flags when I met Panzer, but when soulful eyes beckon …. what a sucker I was!

All of you rottie owners see where I’m going with this 😉 It was obvious that she was was kennel aggressive and she showed her teeth at every opportunity, and as most kennel dogs do, she barked incessantly. My male looked at her as if she were from another planet – this was a new one on him.

Well, it took her 2 months to bite me. I’ve never been bitten by any of my dogs; rotts, GSD’s, or dobes, so it really caught me off guard. No growl, and she was quick as a snake. Her background lent itself to a fear biter. So far, it’s been the one and only time she’s done it, and I believe that’s all it will be.

There have been so many other hurdles she and I have worked our way through and have successfully overcome and I know it’s been a tough and confusing time for her, which makes me sad.

I’m glad she and I came into each other’s lives and the only thing that has utterly disturbed me is that Panzer was advertised as a “family” dog. In my heart I know she would have bitten a child or other small pet, well even a large pet. My male tolerated her for quite sometime before putting her in her place and now they’re fine together; his terms.

Sorry to ramble, but just wanted to tell her story.

Panzer is one lucky, lucky girl 🙂

Rottweilers and other similar breeds rarely get second chances…. and unfortunately most people simply aren’t equipped to handle a Rottie with these sorts of issues. I am SO glad she found her way to you!

As you rightly mention, there’s no way a dog with a history like this (of any breed, let alone a big guardian breed) would make a good family dog without some serious and intensive work with someone who is dog-savvy. That could have ended so badly.

Good luck with everything you’re doing, Panzer looks like a doll (I can see why that face went straight to your heart) and even though it’s been tough on her to adapt she now has a chance at the kind of life every dog deserves.

Keep up the great work, she will be worth it. Thanks for sharing ~ Sue