A Love Of RottweilersMy Female Rottie (Medusa) will not stop jumping up on people when excited?? | A-Love-Of-Rottweilers 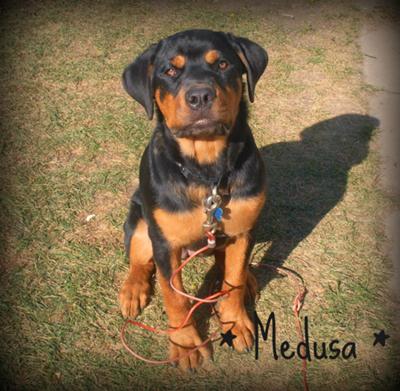 My Female Rottweiler (medusa) will be 2 years old in March, we’ve had her since she was a pup.

She has jumped up since day one, we got her for our son’s 1st birthday and she hasn’t once jumped on him ever, just us adults.

If you have some helpful tips on how i can get her to stop jumping up (as she’s getting over 80 pounds now) that would be much appreciated.

Hi
Jumping up on people is a very common canine behavior, and it’s rooted in their desire to show respect!

The more ‘lowly’ members of a pack of dogs will lick the faces/mouths or the ‘alpha’ dog/s, you also see this interaction between puppies and older dogs, and it’s their way of deferring to authority. Dogs are often jumping at people in an attempt to reach their face and display the same respect. Of course, we humans don’t appreciate that and 80+lbs of dog jumping on you is a bit much to handle.

Luckily Medusa knows better than to jump on your son, Rotties are very smart and females are often very nurturing with children, so I think she probably realizes that she may hurt him.

However, just because it’s natural that doesn’t mean it’s okay and this is something that should have been controlled by now. It’s always easier to teach a pup how to behave than an older dog, because they haven’t yet formed bad habits and are smaller and easier to control. But, an older dog can learn too, it just takes a bit more time and patience.

Make sure you always correct her with a firm ‘No jump’ but use a low, calm voice – if you shout, get angry or swat at her it will get her excited and she’ll jump more! If she’s jumping, tell her to ‘sit’ and don’t give her any attention until she’s obeyed. Once she’s sitting tell her ‘good sit’ and give her a treat or praise.

Often a dog jumps the most when their owner comes home after being away for a while, if that is the case here then try to keep home-comings low key. Don’t greet her right away, avoid eye-contact, and only interact to correct her jumping and ask her to ‘sit’. If you only reward the ‘sit’ with attention sooner or later she’ll figure out that she should try that first!

I’d also recommend a formal obedience class as it helps to get ‘hands-on’ help when you have any behavior difficulties. I hope this helps some, best of luck with Medusa she is adorable.