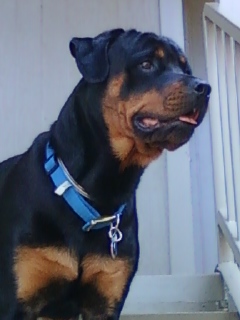 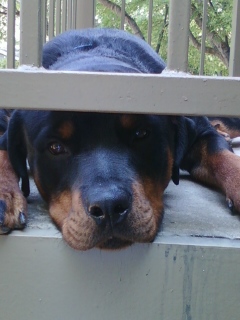 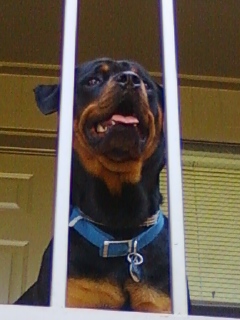 My Bullet has turned 2yrs old and not to much has changed. He still thinks he’s my human baby although he is my baby.

We really have gotten even closer and it seems as each day goes by you’d think he thought it was our last day. He still sticks to some of the things Ive taught him, like kissing me goodbye. I taught him that every-time he leaves the house for whatever reason that may be he has to kiss me and he never ever forgets. If it’s going to the park with my husband or going out to do his business or any reason.

He is so lovable, being I’m disabled with high pain levels, I was sitting on the edge of my bed one night crying and as the tears were sliding down my cheeks Bullet was licking them as they rolled out my eyes. It was such a unique feeling to know that I am so loved by him.

Then I was sitting in my bedroom window just gazing and here comes Bullet, he sat straight up right next to me peacefully until he saw a bird flying and tried to catch and eat it the poor birdie, and there went our tranquil moment, but that’s my Bullet never a dull moment, lol!

It’s like he was trying to tell me, mommy snap out of it cuz everything is gonna be ok. Then I had to give him some attention and lords knows rotts require and most times demand lots of it. I’ve been having to put Bullet in time out and yes he def knows what time out is and hates it, but he’s been getting real mad at me if I’m rubbing his tummy or lovin on him and I walk away, just like a typical male I thought he was gonna snap my head off with that dominating growl, so I had to show him who’s boss and he gets attention when he earns it.

So of course I definitely need to do a lot of working with him cause now he’s getting angry when anybody he loves walks away. So now you can’t say goodbye or kiss Bullet bye anymore until he realizes what he is doing is wrong. Bullet is sosoooo smart that he’ll get the hang of it when he gets tired of people he loves not acknowledging him when he’s left home or whatever the case.

He knows when someone is leaving cause we use to give him kisses, so now when we don’t and he’ll think, I must be doing something wrong. Bullet is so smart that I can teach him something 1 time and he gets it. Like when I go to the store, everytime I go and come home I pick him up something if it’s only a small treat, he gets only if he’s good, he’ll search through my bags until he finds what’s his and he’ll take it, asking of course, and go to his own lil area.

I’m still working on his seperation issues cause for some reason he thinks we’re gonna leave him and not come back. I’m hoping with time although Bullets 2 and we’ve had him since he’s a puppy 4ks old he would feel secure by now.

His appetite has increased and so has his weight. He weighs only 105pds for now and I know he’s still growing. I almost can’t take him for walks alone so now I go with my son or my husband sometimes when he goes out but sometimes I can’t cause he is so protective of me it makes him a lil nervous, I guess because he knows I’m frail at this point in my life.

He doesn’t even like for my son or my husband to help me get in our vehicle and don’t even mention when they try to put the seat belt around me. He just thinks everybody is hurting me cause I ouch a lot when I walk or move certain ways. I’m trying really hard to teach him that they are helping me and I always have to reassure Bullet that Im ok.

Bullet will even sit straight up watching over me when I sleep if he knows I’m having a bad night or day. I can’t even put it into words how much I love him. I never thought that much love existed.

I’m posting some new pics of my baby, my best friend for life. ENJOY!

Antoinette, Bullet is looking wonderful 🙂 It’s so heartwarming to read how much your Rottie means to you and how devoted to you he is. Rottweilers are very smart, but sometimes they can be too smart for their own good and think that they ‘know everything’ and are the ‘boss of everyone’!

Do continue to make sure that Bullet knows that he is not in charge and keep up with his training. The separation worries, over-protective behavior and so on will eventually die down as long as you reassure him, keep predictable guidelines and house rules for his behavior, and are firm and fair but loving.

He’s almost an adult now and it sounds as though you’ve done a great job with him so far.

Lots of luck to all of you ~ Sue from a-love-of-rottweilers.com