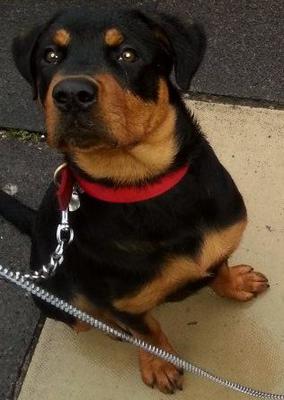 The biggest softie you could ever come across 🙂

He’s such a lovely natured boy! He lives with his 3 female best friends who are chihuahua’s – even though he sometimes thinks it’s fun to chase them he’s always soft with them 🙂 (proof rotties aren’t bad at all if brought up the right way!)

He is 5 months old now and still shooting up.. 😀

He is my big baby and I love this dog too much :)!

He’s very cheeky and has many friends on the local market who like to see him once a week & spoil him with treats.. he’s not stupid as he pulls me over to each stall that his friends work at!

In terms of being an “aggressive guard dog” that some people portray rottys.. he is the poorest excuse i’ve ever come across, he barely even barks! The little monkey can be naughty though and likes to jump up to the kitchen counters & steal food and knock cutlery off ! but besides that I wouldn’t change him for the world 😀

And I’d like to share my beautiful boy off to anyone thinking of buying a rotty so they can see it’s definitely the best choice they could possibly make.

The unconditional love you get from these dogs is unreal 🙂 Although do take into consideration the time & effort they require as they are BIG dogs with copious amounts of energy.