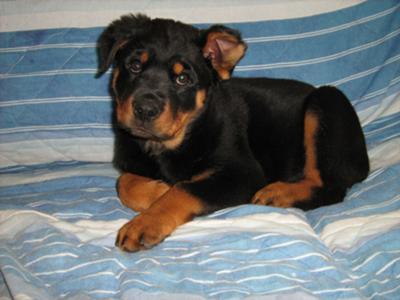 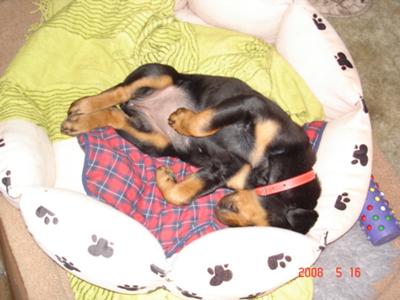 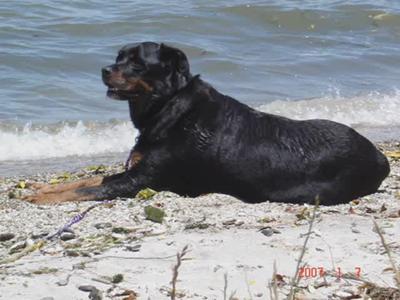 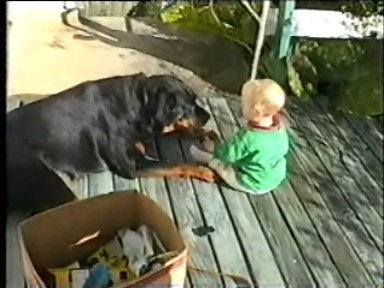 I got Jackie after my very first Rottweiler, Sasha, passed away at 9 years after surviving parvo as a puppy and finally being diagnosed with bone cancer. I was devastated and it took me a long time to get over it.

A week after Sasha died I needed to fill the hole in my heart so went looking for another puppy, it had to be a Rottweiler. I found this 8 week old puppy in another town and took her home with me and fell in love all over again.

But as she started to get older I realised that she was not Sasha and was a bit hard on her. I threatened many a time to give her away. We went to obedience and even tried agility. While doing agility one of the jumps fell onto me and cut my head which bled a great deal. Jackie was a dog that did not like blood!!, so I could not get her to do agility ever again.

When she was 2 I got her a playmate, an English Pointer puppy. They were the best of friends and would always sleep and play together.

I remarried when Jackie was 3 years old and my husband fell in love with the breed. He had never had a dog as a pet before, let alone having a dog inside the house, but he was won over by Miss Jackie, who adored him. When Jackie had to be put to sleep we were both devastated. I wanted to get her cremated but my husband wanted to bury her himself, that was his way of dealing with his grief. My English Pointer was also devastated and had to be house trained all over again.

A year after Jackie passed I wanted to get a companion for my Pointer but my husband said that it had to be a Rottweiler, so we started talking to breeders. We picked up a wee puppy from a new breeder living in the country. It was the first litter for them but they had used father and daughter, which I thought would be okay as the pups were registered with the NZ Kennel club. As it turned out it was not good, Misty had 4 eye operations before she was 1 year old. At 20 months Misty got spinal cancer and after fighting to save her and putting her though some major surgery we made the hard and right decision to put her to sleep. Again our hearts were broken, but we went out again and talked to breeders, this time long term breeders and found this 10 week old puppy who had had part of her ear bitten off by one of her siblings therefore could not be sold as a show dog.

We have had her for a year now and she is going great at the dog obedience and has the most wonderful nature. She never nipped as a puppy and just loves everyone. Cindy (the Pointer) is not so keen on Penny but Penny is quite happy to play by herself.