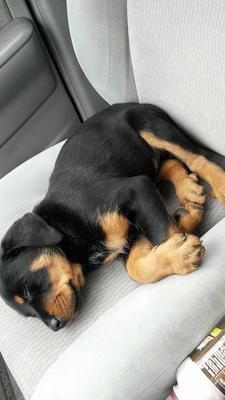 Max loves car rides, he either sleeps the whole time or insists on sitting in my lap! 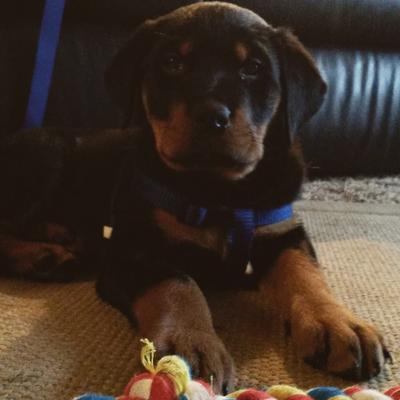 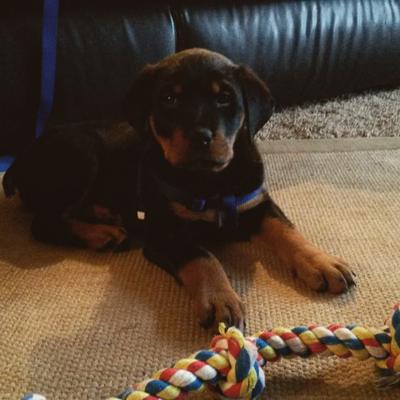 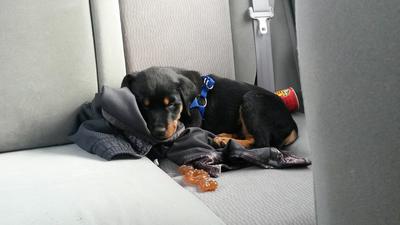 The day after we picked him up.

Hello! This is Maximus, or Max for short. We drove 14 hours to get this little boy, and we haven’t regretted it.

Max was the biggest out of his litter, and was the last one to be taken home. He was born on October 29th, 2014.

His mother and father were both very obedient and very big cuddle bugs! Max’s mother, Mia, had a litter of 11 puppies.

Max spends his day playing with his toys and meeting new dogs. So far he has met a total of six dogs. He has played with three Labrador Retrievers, Lucy, Charlie, and Desmond, a Shih Tzu named Fritz, a Beagle named Boone, a Manchester Toy Terrier mix named Loki, a Boxer named Bella, and finally his furry brother, Franklin the American Bull Terrier.

Max adjusted to our new home fairly well, but he continues to nip and bite at his mom and dad (no one else..) and chews up anything in sight.

At night Max likes to sleep with his mom and dad, but here lately he has been getting up in the middle of the night and chewing on shoes and chargers (his daddy was not happy to say the least!). During the day while we’re at work, Max stays in his crate with his puppy pad and blanket. Outside of the crate he has a truck load of toys and a dog bed that is so big, he looks like an itty bitty Chihuahua on it.

Max still has not gotten the hang of potty training. Right now it is below zero so he does not want to be outside, and I understand that. I still take him out, he has only went potty once outside. He has used his puppy pad a few times but he still goes on the floor whenever we aren’t looking.

We love Max to pieces, and look forward to seeing him learn and grow. He already knows how to sit!

P.S, is it normal for him to have a few white hairs on his chest? They are longer than his black and tan hair… I want to think it’s baby hair. Neither of his parents had white on their chest but his breeder did show some concern and was afraid that we’d be mad about it. Since Max isn’t for show or for stud I’m not to worried.

Hi Brenna, Max is gorgeous and he sounds like a typical Rottie 🙂 Don’t worry about the white hairs, this happens from time to time and is a throw-back to the very early dogs the breed is descended from. A white PATCH is a serious fault for showing purposes, but a few white hairs are not. As you’re not showing or breeding it is totally irrelevant. He’s a beautiful boy! ~ Sue