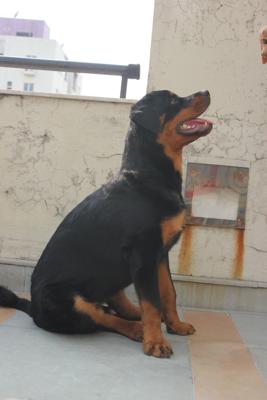 My Rottweiler male pup is about a bit older than 6 months now.

Since last month he has this problem of limping while walking. This happens in the front legs. It is not that he limps all the while but only after he rests for a while. That too these symptoms are not there always..he does this for a week and then he walks normal till the time he starts limping again.

I wanted to know if the problem is serious enough to go get an X-Ray done or is it growth phase related thing which will get fine as time passes by.

I personally dont think he’s over weight, He is 6.5 months and weighs around 32 kilos.
but your opinion counts.

im not sure if the food that i give causes it or what?

Till last month i gave Royal Canin Large breed puppy food which had 32% protein with other fillers.

Since feb we are giving Taste of the wild, wetland food for all life stages which also has 32% protein but largely Animal based with no fillers.

Plz help me understanding, cauz it has started worrying us. Could this be Panosteitis or something else??

Hi Sand
That’s a lovely Rottie pup you have and it’s difficult to tell from photos but he doesn’t look overweight.

However, he has a large bone structure and is well built for such a young pup. His weight is right on the upper end of average, so although I don’t think he’s too heavy it is important to keep an eye on his weight and not to allow him to become so.

I’d guess that what you’re seeing is Panosteitis. He’s about the right age to see it develop and the symptoms you mention are pretty classic. This isn’t necessarily related to diet, it’s something that often just occurs due to development, and then disappears without treatment.

A good diet is important though as an imbalance in nutrients can cause too-rapid growth which can lead to bone and joint problems or make existing ones worse. The food you are using is a good brand, but in my opinion the protein content is too high for a large breed puppy. I’d recommend trying to switch to something that has a more moderate level of protein, something between 23 and 25% is recommended.

This page Feed Program For Overseas has information you might find helpful when you’re trying to source good quality food in your region.

I hope this helps and that your pup is doing better soon. Good luck with him.