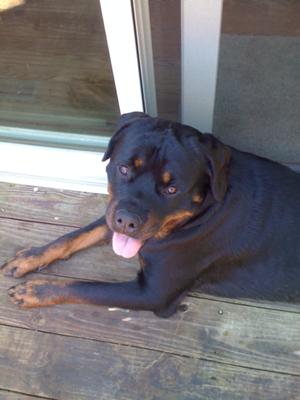 We just recently bought a 18 month German Rottweiler male. We don’t have the biggest house but it’s a decent size. We recently tried to leave the dog at home for a hour or so with it roaming the house because the previous owner said that he did that with them and was fine.

It didn’t go well with us though, he marked his territory well through out the house and scratched up some doors pretty good. We have only had him a few days but we are going to look into buying a kennel for him and training him for the kennel when we leave. We have to leave him alone sometimes and we want to do it right.

What’s the best method for training a 18 month rottie who has previous training from other owners. He was not kennel trained by his previous owners but he is very well trained in other aspects of youth. Please let me know what your method would be.

Hi Patrick
Your Rottie is a very handsome boy, looks big too!

The scent-marking and scratching that you describe is to be expected given the newness of this dogs’ situation. He will likely be a bit confused and maybe anxious right now, Rotties tend to bond closely with their owners and are often one-man dogs, so readjusting to new owners and a new home can take some time.

A crate would definitely be the best way to go for now, that way you will be able to leave him without having your house/belongings damaged. As he’s almost an adult, he will have good bladder/bowel control and since he’s already well-behaved, hopefully you won’t have too many issues getting him used to the crate.

Get one that is big enough for him to be comfortable, but not have tons of space around him just in case he decides to try to mark it or urinate in it. Also, don’t get the cheapest construction – they’re okay for pups, but an adolescent or adult Rottweiler needs a strong, robust crate. Usually I recommend the fibreglass/plastic enclosed crates, but in your pups’ case you may want to go with a wire crate as he may feel less restricted in it and it won’t be so scary for him. The choice is really up to you though.

Get him used to it by putting him in it for short periods while you are home, and always make sure he has a special, sturdy chew toy or two to play with while he’s in there (see my Tough Dog Toys page for some of the best). Give him a treat when he gets in – or throw it in so that he follows if he won’t go in voluntarily. Trying to force a Rottweiler to do anything is difficult, especially until you have bonded and he obeys you without question, so a treat or two can work wonders!

As it sounds as though your boy has been trained in general, and is good natured and not too nervous or anxious, he should take to the crate without too many problems. Patience and consistency are important. Just give him a little time to get used to it and I’m sure it will work out fine.

Best of luck with your good looking boy!