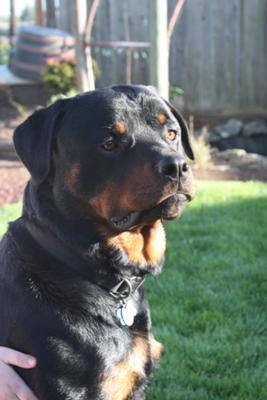 We just recently adopted a male Rottweiler about 1 1/2 yrs old. He is very loving, sweet, pretty much a lover boy (big baby) BUT he gets a little wild sometimes.

He will get this “wild” streak in him and start running around the yard, jumping, and making bark/growl like noises.. Almost as if he was showing off. At times, he will go for the ankles, not biting hard, but makes me very nervous as I have a 4 yr old, 13 yr old and 15 yr old. Is this normal behavior?

He isn’t fixed but we would like to get that done, also hoping that calms him down a little?

Hi Dana
Actually this is pretty normal, many puppies have a sort of ‘crazy hour’ (often in the evening) and will run around in circles, sometimes snapping or biting at things or people as they dash past.

It’s a way for them to work off excess energy (both physical and mental) and to ‘decompress’ after a long day. At a year and a half your Rottie is still a puppy, but he’s a BIG puppy and he could definitely send the 4 year old flying if quite by accident so I would exercise great caution and if you see a ‘wild moment’ coming on, round up the kids!

Now, although this is normal behavior, that doesn’t mean it’s all okay and your pup needs to learn that there are limits to what he’s allowed to do. From the very beginning you have to set the rules and show him that you expect him to follow them, don’t let him decide what is acceptable behavior and what isn’t.

To me, the running around is okay but the growling and nipping isn’t. When he starts with that you need to tell him ‘NO’ firmly, but don’t shout or get angry or frustrated as you will only raise the emotional level of the situation. Be calm, but firm. If he continues to do it, then you need to get hold of him firmly and put him in a ‘time out’ – ie put him in a separate room with a couple of sturdy chew toys and let him cool down. You can also use his crate for this as long as he already accepts being crated, it won’t hurt his crate training.

You may also want to increase the amount of exercise he’s getting as well as the mental stimulation. An extra walk at a reasonably fast pace, a game of ‘fetch’ in the yard and a couple of training sessions a day should help. I’d also recommend getting him enrolled in a basic dog obedience class at a local school as you’ll be able to get some ‘hands-on’ help to understand and deal with any behavior problems or concerns.

Overall it sounds as though your pup is doing great, just be sure to maintain loving, but firm, discipline. Your pup is actually an adolescent right now and as you already are raising human teenagers you will probably have some insight into his behavior. Raising puppies and children is actually quite similar 🙂

Hope this helps, I wish you the very best of luck with your Rottie, he’s very handsome.