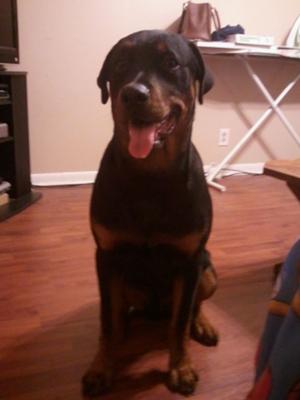 My Rottie keeps jumping on people when he sees them. Then he runs through their legs.

How do I get him to stop? He is about to turn 8 months.

Hi Melissa
Jumping up at visitors is a natural and instinctive canine behavior. Sometimes it’s their way of showing that they recognize authority (wild dogs will lick the faces of the more dominant dogs), other times it can be a way of trying to exert dominance themselves.

Kane is still a puppy and I think he’s most likely doing this as a result of the first motivation… but it is something you need to correct because Rotties are big heavy dogs and can easily knock someone down if they’re small, light or frail.

Obviously the first way to do this is with a firm, verbal correction such as ‘no jump’, make sure the people who are being jumped on give him this correction as well as you. He needs to know it’s not okay by anyone’s standards. Don’t shout or get angry etc. though as that will make him excited and he’ll jump even more.

In addition to the verbal correction I’d recommend getting him a short training leash (see my Leash Training A Puppy page for one of these, also known as a ‘pull tab’) and when people are coming over have it attached to his collar. It’s basically a leather ‘handle’ and you can use it to give Kane a short, sharp tug on his collar whenever he goes to jump on anyone.

To be most effective you may want to combine it with a ‘choke chain’ or ‘prong’ collar rather than his regular buckle collar. BUT don’t keep this type of collar on him when you’re not actually training him as if it gets caught up on something it could literally choke him.

Any type of training needs to be consistent, and you need to repeat it every single time he indulges in the behavior you want to stop. Be patient, firm and loving and he will learn what is expected of him. Rotties are very intelligent and eager to please and as long as you show him consistently what you want he will do his best to oblige!