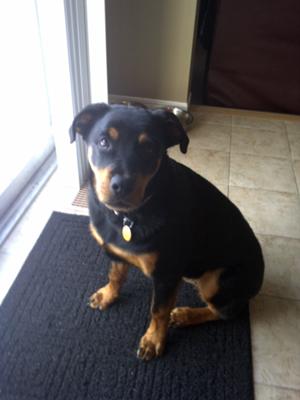 I have a question about how to stop your Rotti from jumping on the counter and grabbing food while you are cooking. My Rotti is 6 months old female, and now that she can reach the counter she thinks the food is hers. Also the garbage can, she constantly tries to lift the lid to get at our food. We don’t feed her table scraps.

One another note, what age do you try to let your Rotti have the run of the house. She has been crate trained since she was a pup, but would like to give her a little freedom while we are work. Your thoughts!

Hi Suzanne
‘Counter Crusing’ is fairly common in large breeds, as their noses are on the same level as all those delicious smells and they just can’t resist!

However, it’s a definite ‘no-no’ and you need to discourage it firmly and consistently. A firm ‘NO’ (don’t shout or smack though as that will make things worse, not better), and a quick but gentle shake by the scruff of the neck each time she tries it are recommended. The same with the garbage-can behavior.

You can’t expect overnight results though, as corrections need to be consistently given for a period of weeks in order to be effective. If after 2 weeks of consistently correcting her you don’t see any improvement, you could try the ‘water spray bottle’ method.

It’s sometimes used to discourage a persistent ‘puppy biter’ but can also be applied to other situations like this. Simply buy a small plastic spray bottle and fill it with water, then set the nozzle to ‘jet’ or ‘stream’. When she jumps at the counter, or tries to get in the trash can, say ‘No’ firmly and then give her a quick shot of water right on the muzzle. Avoid her eyes, and don’t shoot right in the nostrils, just aim at the end of her muzzle if you can. The surprise of this is usually enough to stop a pup in her tracks.

Again you’ll need to be consistent about it, but given time and patience she will eventually learn to stop this behavior.

As for her having free run of the home, personally I would say that at 6 months she’s still a bit of a risk in terms of having an ‘potty accident’ and isn’t entirely out of the chewing stage. But, you know your own puppy best and if you want to give it a try, you could set up a few ‘trial runs’ where you’re gone for just a short while and see how she does. You could try just containing her in one room, or a couple of rooms, where there is a washable floor surface and a limit to how much damage she could do at first.

Hope this helps, best of luck with your little girl she looks so adorable :o)