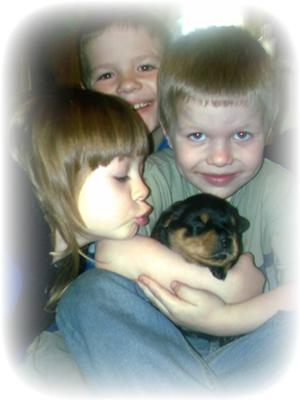 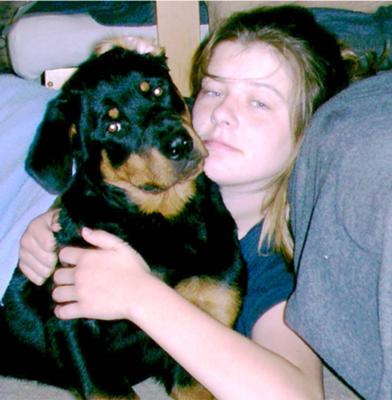 Plats markings and structure is great 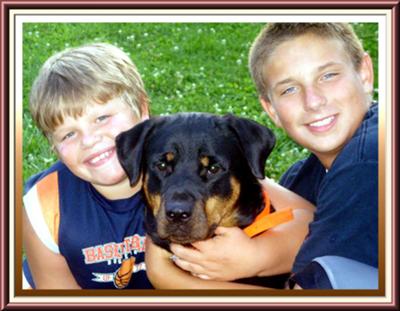 Plat-Num who we call Plats for short has brought so much love, happiness, and laughter into our lives that she has to be the Comedian of the Rottweiler breed. Plats was also a puppy that we kept to further the the bloodline as well as the traits of the previous generations behind her that we have owned.

Our female Maiden is Plats mother and we picked Bubba to be her daddy. Maiden comes from previous dogs that we owned but we added in the Gil Crni Lotos line of dogs to achieve Maiden. Our next puppy we wanted to bring back some of the marking’s that seem to have gotten lost on most Rottweiler’s today. We wanted wider, brighter, more defined markings to where if you walked by Plats you would be WOW they don’t make the markings like that anymore!

We looked at Bubba he was producing litter’s where every puppy had markings that stood out and that did not have black hair’s strapping through them, the marking was of only one color and not stagged by black. We watched his production for a while and we met his parents as I feel that is important to show a pattern of temperament sound relatives. Finally the breeding took place and on January 31 of 2007 my Plats was born.

I remember her specifically as when she was born she was not breathing, I tried several minutes as they went by faster and faster to bring her to life. Mouth to snout, chest stimulations, nose suction, the promise if she lived I would keep her forever! But after time passed it look like she was not alive so I laid her in a towel and focused on Maiden to assure her I was still there and would not leave. About 35 minutes later I hear a moan/whine noise the family started searching crazy and fast as we thought she had a puppy in the house and not in her whelping area, then I thought Oh No! I lifted the towel and it was the most beautifully marked female puppy I had seen in a long time (Years).

I knew she was in distress I started warming her up with warm water gloves (hospital gloves no powder type) I put her on a heating pad (low temp) added the water bottles around her to give her added security (they feel like littermates) and added a heat lamp hung above her. I started by giving her drops of warm milk that had hi vitamins for weak puppies this hopefully would give her nutrients she could absorb, I stayed up with her and feed her every hour to two hours as needed, I did this for the first week in shifts with the family as breeding a dog usually is not for the single person especially if the dog has a history through generations of producing large litters.

Finally Plat-Num (Hess’s-Gotta-Go-Plat-Num was stable and growing like a Rottweiler. She was everything I wanted and more. To save a puppy is a awesome feeling and one that does not come along daily. Maiden had 2 girls in that litter and if the events surrounding Plats birth would not have happened we would have chosen the other puppy. But it was like she was meant for us.

Plats was not a large Rottweiler but yet she was good in size and head to compare to any Rottweiler. She was a ball of fire, friendly as long as introduced, loves kids, great with other animals. The only thing that I felt faulted the breed and her, was this crazy nerve wracking OMG of a sound she made when she barked. When Plats barked OMG it sound like a coooooonnnnn hound dog, it would start raspie and go on for ever and I would hopefully stop before another would get out of her.

I thought that does not even sound like a large dog/Rottweiler bark! No body will even stop if they hear that unless they think it’s dying. As Plats grew she developed into a Rottweiler that acted, even looked to understand humans more than any other dog I have owned. She would tilt her head when you spoke about her even if you did not look at her. Plats had nice brown that went to Mahogany markings by age 2 years old.

Friends/Family were shocked to see how markings on puppies can go from light to dark as they grow, but also they can go lighter in summer than winter as sun will cause some color on dogs to fade.

Platnum did have puppies but we did not keep any of them as we thought we would have a chance to before we retired her. We still will have access to her bloodline as we are going to use her son Lucian to breed our female lady with that breeding we will keep our generation from plats. Lucian represents Platnum and her bloodline better than any other puppy from her does. With this in mind we made our choice of son’s from Platnum.