A Love Of Rottweilersis my rottweiler puppy too big? | A-Love-Of-Rottweilers 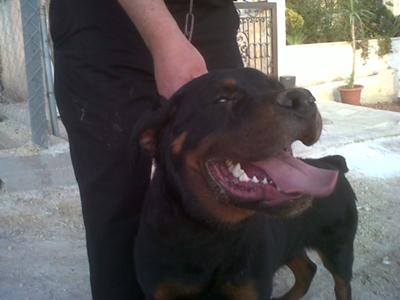 hey i have a 5 month old rottie male, he weighs 75 pounds which is much bigger than the average posted on this wonderful site.

i don’t over feed him at all, he eats royal canin which is a top premium dog food, his dad weighs 145 and mom weighs 100, i’m afraid he will be bigger than he should, what should i do?

Hi Issa
It’s important to remember that the average weights given in the rottweiler puppy growth chart, are just that… average. Many dogs will be lighter, or heavier, and there’s very rarely a dog who is right on the average mark!

As long as you’re feeding your pup a good food (which is seems that you are, and I know that getting good dog foods can be difficult in some countries/regions/areas), and not overfeeding him, then I wouldn’t worry about this.

It’s difficult to evaluate him from the photo, but he doesn’t look overweight to me. 75lbs is definitely big for 5 months, but some pups have the bone-structure to support that weight and as it’s happening naturally then that is most likely just the way he’s supposed to be.

Also, depending on genetics some puppies grow bigger, faster than others… then their growth rate slows down and the ‘slow starters’ catch up. Every puppy, and every dog, is different.

As both his parents were big, heavy dogs, then he will most likely be similar when fully adult, and male pups tend to be closer to their dad in terms of adult weight than their mom.

Hope this helps, best of luck with your pup.