Housebreaking a puppy is one of the first tasks new owners face, and it’s probably the most challenging too. 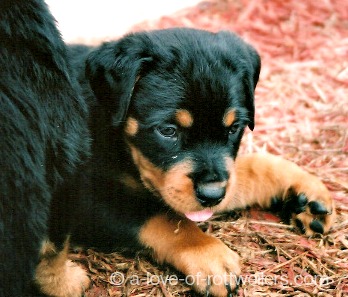 If you’ve just added a puppy to your family, this guide will help you to understand the basics of puppy potty training and help get you started out on the right foot.

Puppies are creatures of habit, and they thrive on routine.

By setting up a regular, predictable schedule of potty breaks, meals, play/exercise and sleep, you can make the process of house-training a puppy quick and (relatively!) easy.

Like all puppies, Rottweiler pups are eager to learn, and want to please you. Most problems with puppy potty training happen because the owners haven’t shown their pup what is expected of them clearly and consistently.

The Right Way To Start Housebreaking A Puppy

Housebreaking a puppy starts the minute you bring the little guy (or girl) home!

Before you even bring your Rottie puppy inside, take her directly to the place where you want her to eliminate outdoors.

A grassy area is best, somewhere not too busy but close enough that you can get her there from the house pretty quickly – you’ll need to do this often.

Try to use the same door as often as possible, this will help later on as he/she will naturally head for that exit when nature calls!

firmly attached to the handle on that door.

At first you’ll need to help your puppy to ‘ring’ the bells, and at the same time you can use a verbal cue such as “time to go potty!”.

Puppies learn by repetition and your little one will soon associate these bells with the need for a potty trip and, when mature enough to have free-run of the house, will ‘ring’ them herself to alert you.

Choose a word that you’d like to use as a ‘trigger word’ to encourage her to pee/poop. I usually use the words “go potty”, but anything will do – she doesn’t understand the word but will learn to associate it with elimination over time.

Let her walk and sniff a bit, while you quietly repeat the trigger word. When she ‘goes’, tell her “good potty” and pet her. A treat is a good idea too. Then you can go inside the house.

When housetraining a puppy, I strongly recommend using a crate. It is almost a ‘miracle tool’, and helps to prevent 99% of accidents indoors (when used properly).

It also helps your pup to learn bladder/bowel control, and is a safe place for her to stay when you can’t be with her. Visit my Puppy Crate Training page to learn all about this method of housebreaking.

Of course you’ll need to supervise your puppy closely whenever she’s not in her crate, and learn the body-language that indicates the urge to pee/poop (usually intense sniffing, circling and eventually squatting).

Your new 8 week old puppy will need a potty break approximately every 30 minutes to an hour, and will probably need to go outside at least once, maybe twice during the night to begin with.

As she grows and matures, so will her bladder/bowel control and she’ll be able to ‘hold it’ for longer periods.

Puppies learn through association and form habits (both good and bad) very quickly. The ‘trick’ to housebreaking a puppy is to make sure that she learns the CORRECT habit right away.

Inconsistencies, poor supervision and infrequent potty breaks can make housebreaking a puppy take longer, and be more stressful than it needs to be.

It usually result in a pup who adopts the wrong habits (such as peeing on the carpet), because she hasn’t had a chance to learn the correct habit. There’s a saying ‘if the student hasn’t learned, the teacher hasn’t taught’, and this sums the situation up perfectly.

Unfortunately once the wrong habits are started, you have two things to teach your pup – to un-learn the wrong way, and then to re-learn the right way.

Obviously this is twice as difficult and it’s much better not to get yourself (or your pup) into this situation in the first place!

How To Handle Potty Training ‘Accidents’

When you’re housebreaking a puppy, there are bound to be a couple of ‘accidents’, even when you’re super-careful.

BUT, they shouldn’t happen often. If they do, YOU’RE doing something wrong and should take a close look at your housetraining method/routine.

Puppies are drawn back to the spot of a previous elimination by scent.

Even if you think you’ve cleaned the area thoroughly, unless you use an enzymatic cleaner (such as Nature’s Miracle) which is especially designed to remove all traces of odor, you’re little girls acute sense of smell won’t be fooled.

When you’re housebreaking a puppy, here’s what to do if she pup pees/poops indoors:

Important Note: When you’re housebreaking a puppy, never scold her unless you actually ‘catch her in the act’. Otherwise she won’t have any idea why she’s being punished, and it will only frighten her.

If you’ve given her the time and opportunity to eliminate out of your sight – you’re at fault! Scold yourself  🙁

The keys to successful puppy potty training are routine, patience, vigilance and consistency. If you follow the guidelines above, you will be able to housebreak your puppy without too many tears.

But you need to be realistic in your expectations. You’ll be disappointed if you fully expect your Rottweiler puppy to learn the right habits within a week! 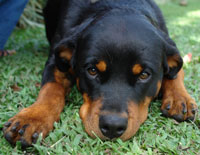 While it’s true that some puppies are little ‘Einsteins’ and practically train themselves, the majority of them aren’t quite as quick.

You can expect your little girl to grasp the basic concept within a few weeks, but she simply won’t be equipped, mentally or physically, to be reliable for some time.

In my experience, crate training speeds up the process of housebreaking a puppy (and makes it less stressful for everyone), but most pups aren’t really reliable about their potty habits until they’re around 6 months old.

One of the drawbacks of potty training a large breed pup like the Rottweiler, is that any ‘accidents’ will be equally large!

However, this is counter-balanced by the fact that your Rottie pup has a bigger bladder than the tiny or toy breeds, and consequently can ‘hold it’ a bit longer too. Don’t be tempted to push your luck though.

So, now you’re all set to start housebreaking your puppy the RIGHT way. Your little girl (or boy) is going to be a star!

And some final words…..

Housebreaking a puppy is something that it’s worth taking the time, and finding the patience, to do right!

An adult dog who hasn’t learned the correct elimination habits is difficult to live with, and sadly way too many dogs are abandoned every year because of this.