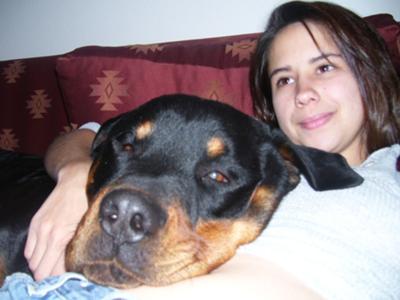 This is how Hemi sleeps, head on my chest.

Hello, my Rottie is named Hemi. My boyfriend named and raised him so just like dad he can be a big goober.

Never having owned a Rottweiler before I wasn’t sure about it with all the “big bad dog” rep they had. Needless to say Hemmers won me over the first time he tried to pick which hand the treat was hidden in (not before getting it wrong twice then cheating by sniffing my fist). Now I can’t even imagine him biting or hurting anything, the brat can’t even catch a fly!

The first time I heard him growl he was protecting me…no one is allowed to get too close if it’s just him and mom. Even though he is a huge spazz who talks when he’s happy and dances like a bull when you say truck ride I finally convinced my boyfriend to stud him out to one of the girls at work with a female named Daisy. Little Hemi Jr.’s running around and I can’t wait!

P.S. “Swamp Thing” is his nickname due to the fact that his backside sounds like a fog horn and when it’s silent it smells like you wandered into the black lagoon.