A Love Of Rottweilershelp is my rottie medically troubled? | A-Love-Of-Rottweilers 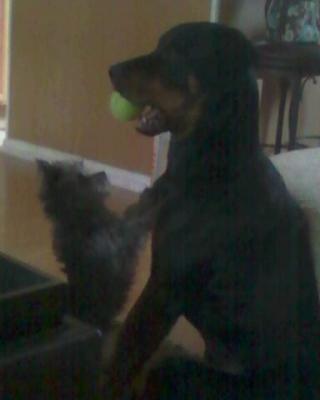 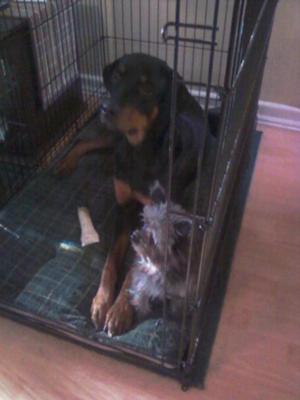 Jade is a very sweet 2 y.o. German Rottweiler. Part of our family since 6 weeks old. She listens to all commands, except off leash, she rather play chase. Loves the outdoors. Won’t eat till told. Potty Trained. Healthy. Has all Shots. Spayed.

Has always been very skittish near dogs and children, she has gotten a lot better with that but she rather stay away like it doesn’t interest her, even in class she walks away from dogs and kids. She’s been in daycare for socialization and did not like all the interaction. She currently lives with a 1 year old tiny Pomapoo which she gets along with great and plays very gentle since 8 weeks old. She’s been thru a couple of puppy classes as well.

Does great on walks. Does great crated in the day and is currently being crated at night without a problem, since lately she tends to chew anything she finds when bored. Lately she’s also having issues with everyone, including the family, touching her, this was an issue back when she was 6 mos as well which we sought help for. She’s not growling aggressively only growls when touched at times, no matter where she’s touched. If it’s continued she will growl and show teeth and she puts herself in timeout in her crate, she’ll walk away herself growling, she growls at all her family including Oreo. She is very playful but when not playing seems to always be very moody, likes to be by herself in her opened crate. We hired a canine specialist which told us she has potential but will need some working on .

Hi Cindy
It’s very difficult for me to figure out what’s causing Jade to behave this way, as I can’t actually see or interact with her.

However, there are two main possibilities. The first one is that her personality is naturally one of a ‘loner’ – dogs are like people and are all different and unique. Some are social butterflies, others prefer their own company. There’s nothing wrong with either choice, but the growling is something that needs to be dealt with.

The other possibility is that she has a health issue of some sort and pain or discomfort is making her act this way. Rottweilers have a very high tolerance for pain and although she’s not showing signs of it to you, there could still be an issue.

First of all I’d recommend having your vet give her a thorough exam, all over, blood-work etc. too if necessary, so that he can rule out a physical problem. If she’s likely to growl or snap when he examines her, explain that to him and muzzle her if necessary. It may upset her, but this is for her own good because you need to find out if something is hurting her.

If physically she checks out fine, then my second piece of advice would be to change her food to one that is designed for dogs with food sensitivities or allergies. A food allergy can occasionally produce no other symptoms other than emotional/temperamental ones such as aggression, depression etc. Check out my Hypoallergenic Dog Food to learn more and to see some of the best ones on the market.

You will need to wait at least 2 months of having her on the new diet before you can assess whether or not it’s helping as it takes quite some time for the effects of the allergens in her previous diet to wear off. Also, when you do this diet change also be sure that she only gets hypoallergenic treats as well.

If neither of these measures help, then it’s a behavioral issue and probably compounded by her own personality. As she is so well-trained and sound in all other aspects of her life, it’s one that you should be able to control with the right approach.

In that case a professional dog trainer or dog behaviorist would be my recommendation, and it’s important to choose one who is familiar with large, guardian breeds and won’t misinterpret Jade’s behavior or assume she needs a heavy-handed discipline. That would be counter-productive.

The Rottweiler breed should be calm, aloof and fairly distant with people or dogs they don’t know. It’s part of the breed character, Jade may be taking this a few steps too far, but it’s better than being overly defensive or aggressive. She’s under-reacting rather than over-reacting and that’s not such a bad thing.

The biggest issue is the growling and I think that if it turns out to be unrelated to a health issue or allergy, then it will simply be a matter of working with her and using training and corrections to stop it. BUT take the time to find a trainer that you like and who will understand your dog.

I hope this helps and wish you the very best of luck. Jade is a lovely girl and obviously an integral part of your family, I love the photos 🙂