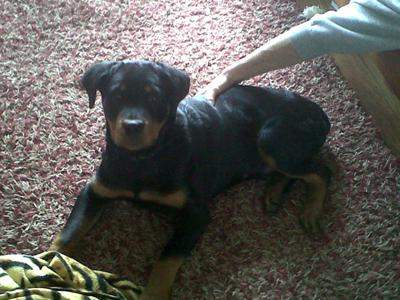 hello, my 4 month old rottie hates being in the backyard alone, he is getting bigger and he is very energetic and loves to run, it will be great if he spends more time in the backyard where he has all the space he needs to run and play.

but for some reason he prefers being inside, the moment i go in and he is out alone he starts crying and barking. he also licks the glass and bites the corners.

what can i do to prevent that ?

Hi Kam
Rottweilers are very loyal and loving dogs and they usually bond closely with their owner/s. Your pup doesn’t like to be separated from you and although you think that he’ll enjoy the space to run around and play, he just wants to be next to you!

Puppies don’t play by themselves in general, they need someone to interact with. Left alone outside he will simply be bored and lonely. If he’s bored he will get destructive, and if he’s lonely his temperament will suffer.

There’s really nothing to be gained by leaving him outside. If he needs more exercise and stimulation (which he will at this age), then it would be much better for you to take him on more walks or outings and to give him daily play and training sessions. That way he can use up his excess energy and enjoy your company at the same time. It will also be much better for his social development and your relationship.

It’s okay for him to be outside by himself for short periods though, and you should simply make sure he has water and shelter and some tough dog toys to play with so that he doesn’t get too bored. But don’t leave him out for too long.

Once he is mature, he will be more likely to accept being outdoors for a while without making such a fuss and will probably just take a nap! But with an active pup this is much less likely.

Hope this helps, best of luck.