by Shirley
(Kingston ON Canada) 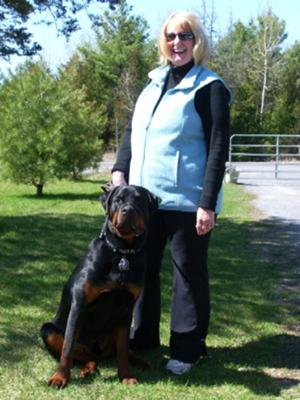 I have a 16 month old male neutered rottie. He is very sociable and when he is older will be evaluated for a therapy dog. He has had puppy, intermediate and advanced training sessions

When he was 8 months old we gave him a raw knuckle bone to chew on but when it was time to leave it he growled …. so we put him on his side for a bit… and took the bone away.

After that we practiced with giving him the same bone and taking it away after a bit and rewarding him with a treat… gave the bone back etc.

He has had several bones since, even last week, but last evening when he has been chewing on a bone that he has had for a week… he decided to not leave the bone when it was time to come in for the night and growling began when he was approached . I said uh uh and reached for his collar and again he growled – I grabbed onto his collar and ushered him in to the house put him on his side for a few minutes and then into his crate.

Is this the best way to handle this as I want to make sure with our rottie that this behaviour rarely if never occurs again.

Your reply is appreciated.
Thanks
Shirley C

Hi Shirley
You have a gorgeous boy!

Food, or possession, guarding is not terribly unusual but it’s definitely a habit that needs to be strongly discouraged. Your boy is at the adolescent or teenage stage and it’s very common to see behavior that is challenging authority and testing the limits during this time. Consistency is key because he is likely to test the same limit several times looking for a ‘chink in your armor’.

Obviously you’ve taken a lot of time to train and socialize your Rottweiler which is excellent and you’ll reap the benefits of this for years to come, but even in the best of situations it can still be a bit of a bumpy ride through adolescence!

I’m not a fan of the ‘alpha roll’ (which is pretty much what you’re doing by putting him on his side) and although it may work with a younger, smaller pup it can backfire when used on older, stronger dogs or those that are strong-willed. You don’t want this to be a battle of physical strength or power, but of authority – he needs to totally accept you as the ‘alpha’ in the pack and that is a mental thing, not physical.

Never back off if he growls at you in this situation, and if we don’t include the alpha roll, you followed the right steps when you removed him from the bone, took him inside and isolated him for a short while. A firm verbal correction, removing the bone and withdrawing your attention from him should make it clear to him that this behavior isn’t acceptable. Always correct him firmly and in the same way, consistency is vital otherwise he will start to feel insecure and that perhaps he just may have an element of control over you – that’s not what you want.

At this age he’s growing into a ‘man’ and wants to be big and bold, but you need to continue to set clear limits for him. Things that may give him an inflated sense of his own importance and that he shouldn’t be allowed to do include….

get up on beds or furniture

go through doorways before you

He should also be happy to allow you to take anything from him, and to put your hand in his food dish or remove it without complaint.

Overall it sounds as though you’re doing a great job with him and it may just need a little bit of ‘tweaking’ and consistent correction, but I’m sure that he will ‘get the picture’ and this behavior will stop by the time he’s mature.

I wish you the best of luck with that beautiful dog :o)