A Love Of RottweilersFostering two pittbull puppies with 3 year old Rottie already in my home. | A-Love-Of-Rottweilers 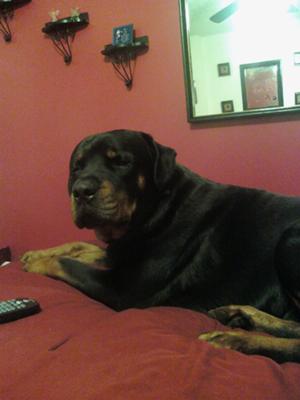 Here again seeking your advice again… I am going to be fostering 2, 2month old Pit Bull puppies, and I want to make sure i know how to handle Zeus as sometimes the male often nips at him. Zeus will usually growl at him and then walk away.

I NEVER leave them in the same area unsupervised, and feed them in differant areas. May concern is that Zeus has become very skittish the three days that I have had one of the pups. And now the owner of the dogs has asked me to foster the female pup as well. How do I get him to accept the puppies being in the home?

Thank you again for this wonderful site!!!!!!!

Hello there!
Good to see Zeus again, looks as though he’s doing great, what a handsome boy 🙂

As for the puppy situation, I’m guessing you’re just fostering these pups on a temporary basis, so hopefully you won’t have to juggle dogs for too long.

It’s got the potential to be tricky because Zeus is used to being an ‘only child’ and Rotties are very loyal and protective of their family. Pitbulls are wonderful dogs and like Rotties, undeserving of their bad reputation, however their breed-characteristics can make them dog-aggressive at worst, and at best they play very rough! The combination of the three of them could definitely require some serious supervision if these pups are going to be with you as they mature.

It’s likely that Zeus will have less conflict with the female pup than the male, but a 3 dog family is also much more likely to be troublesome than a 2 dog one. Three tends to trigger a ‘pack mentality’ and if a squabble does arise, it can easily end up in a 2 on 1 situation, with dogs like Rottweilers and Pitbulls this is not good and someone could get hurt if all the dogs are adults, or at least adolescents.

If it’s simply for a month or two, hopefully there won’t be a problem as most adult dogs are much more tolerant of puppies than they are of other mature dogs and make allowances for their bossy or unpredictable behavior.

I don’t want to sound like a Debbie-Downer and a lot depends on the individual personalities of the dogs, and while these two are puppies it shouldn’t be a big problem. But I feel it’s important that you’re aware of what could happen if you put three adults like this together, even if they’ve been raised together.

Zeus will naturally be a bit ‘put out’ by having a new puppy (or puppies) in the house and may become jealous, clingy or generally difficult or just seem sad. This is natural and it should pass as long as you stay calm and upbeat and make sure he still gets lots of love and attention, and special one-on-one time with his family members.

Pitbulls in general have a very rough deal these days and finding them good, loving permanent homes with people who understand and care for the breed (rather than want to own them as a ‘status symbol’ or from some misplaced macho idea or worse) is crucial. What you are doing to help them is commendable and I hope they find permanent loving homes, and that their stay with you and Zeus is safe and happy.