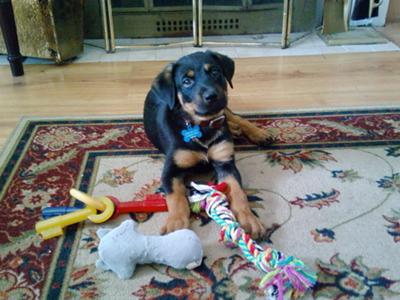 My question is…He has an ‘extra’ rust marking on his chest, between his head and chest. I haven’t seen this yet on others. He also has a black mask.

Would that keep him out of ‘conformation’?

Hi Louise
It’s difficult to tell from the photo where exactly the marking on his chest is, or how big/what shape. Rust coloring on the throat is acceptable, if it’s on the chest it is considered a ‘serious fault’.

The darker muzzle shouldn’t be a disqualification as long as he has markings along the side of the muzzle which it appears he does.

If you were sold Jax as a ‘show quality’ puppy and the rust marking on his chest is obvious then I would go back to the breeder and ask them about it as in my personal opinion that is a problem in terms of conformation. ‘Show quality’ isn’t a guarantee as pups can change as they grow, but markings generally just get bigger… so if there’s one in the wrong place it’s unlikely to improve (unless it’s simply a few hairs in which case it can disappear as the pup matures).

Jax is a beautiful pup and looks happy and healthy, and unless you bought him with the serious intention of showing him I wouldn’t worry too much about his markings :o)