A Love Of RottweilersDo Rottweilers change personalities as they age? | A-Love-Of-Rottweilers 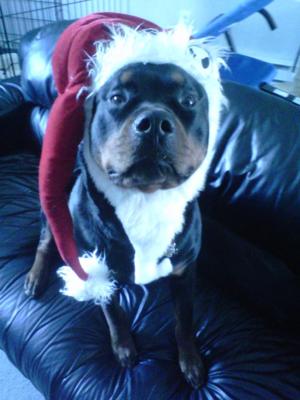 My rottweiler Rufus Von Dufus is three and a half years old, I’ve raised him since he was seven weeks old and he a great dog except for recently. Rufus has always been very vocal but not in an agressive way, he would talk while being petted, playing and even in his sleep. It sounds more like grunts, sighs and soft growls…everyone who knows Rufus knows he’s just an over grown lap dog.

Rufus is very smart, it took me no time at all to train him to do the basics along with roll over, jump through a hoop, fetch, heel and play dead. I pretty much kid proofed him from a young age, I can lay on him, completely squish him, pull on his ears, stick my hand in his mouth, even stick my face in his mouth. He’s such a pushover and pretty much lets me do anything to him, I can roll him over, push him around on the tile floor, vacuum him, brush his teeth and even paint his toe nails if I so choose. He’s never had a problem with obeying a command from me but for my boyfriend who has been around since day one, he simply ignores him which my boyfriend sees as a problem but I don’t.

My boyfriend and many of my guy friends rough house with Rufus and I think Rufus doesn’t see him as his master but more as a play mate. But That is where the problem stems I believe, Rufus growls… it could be considered talking but recently it sounds worse and I’ve seen his lip curl several times. He does this when eating and a cat or dog approach him, when my boyfriend tries to punish him, when sleeping and the cat or dog tries to lay with him and even started guarding his toys.

To correct the behavior I’ve hand fed him but his problem isn’t with me it’s with the cats and our other dog so I feed him in a different room and wait till he’s done to retrieve the bowl because he’ll also guard his empty bowl. I’ve also noticed he wants to guard his water bowl which i just down understand because he’s always shared his water bowl with at least three other animals.
The sleeping thing is harder to understand and I’m just at a loss of what to do with that one because it really could just be him talking.
And the guarding I simply just take the toy away and set it aside.

I’m worried that Rufus’s growling could turn to snapping and I’ve always said that if he snaps at me or anyone that he will be put down and I’d hate to have to do that to him. So I guess what I’m asking is if Rottweilers behaviors change while they age and if the talking should or can be stopped.

Hi Ashley
Rufus is adorable, and from what you say it sounds as though he has an excellent temperament overall and that you’ve trained him well so far.

He’s now an adult and sometimes behavior can change subtly as a dog matures, but growling with a curled lip is a clear warning signal and you need to give Rufus credit for issuing that warning. He’s trying hard to show that he’s not comfortable with something but without resorting to snapping or biting. Although you may have ‘always said that you’ll have him put to sleep if he snaps’ but that is totally unfair and realistic. From what I read in your submission you don’t have an aggressive or dangerous dog, but one who is having some ‘issues’ which it is your responsibility to deal with and help him overcome, and the sooner the better.

Obviously Rufus regards you as the ‘boss’, and you may not see a problem with him not seeing your boyfriend the same way but there is one. Your dog needs to defer to all humans, not just you, and your boyfriend needs to become more proactive and involved in Rufus’ care on a daily basis – with your help and blessing. No more rough-housing or being a playmate, he needs to be an authority figure. But only ever in a positive, loving way – no harshness etc.

I’d recommend starting to split the caregiving tasks such as feeding, grooming, walking, training etc. You may need to be with your boyfriend to help things along at first, but the aim is for him to be able to interact with Rufus in every way you do, without issue.

The resource guarding needs to be dealt with and I’d also recommend that your boyfriend hand feed Rufus to make sure he doesn’t become a target. With the other dog and cats it’s more difficult and you may need to simply separate them for now when it’s feeding time until his behavior improves overall.

I’d also recommend using some basic strategies to help Rufus realize that his position in the family is a lowly one! It may be that he’s just giving himself a little too much authority here and you need to take him down a peg or two right now.

The best way to do this is to start making him ‘work’ for everything… treats, walks, games, meals etc. Ask him to ‘sit’ or make him do a ‘down’ or ‘sit-stay’ or ‘down-stay’ and don’t reward him until he obeys. Be calm, but firm and start easy and slow – a 5 second ‘sit’ for example and work up. Also, don’t allow him to sit or sleep on furniture, beds, top of the stairs, in doorways or block corridors etc.

Don’t allow Rufus to control your actions with his, ever. Dogs can be very clever about this. For example he comes up and nudges you for some attention and you turn around and start petting him… who’s in charge here? Rufus! Don’t let him whine for his supper, push you around when playing etc. etc. All these things mean power in the dog world.

I don’t think you have a bad dog at all, just one that’s testing the waters a bit and needs to be reassured where his place is and how he should behave. AND always correct him firmly with a verbal ‘NO’ if he growls or acts as though he is objecting to something that you feel is necessary for him to accept – obviously within reason and fair though.

I’d recommend also getting him enrolled in a basic obedience class so that you can get help from a professional dog trainer. Hands-on help is invaluable when problems like this arise. A dog behaviorist is also an option if you find that you can’t reshape his behavior yourself. However it sounds as though the relationship between you and your Rottie is a good one, and strong, and with patience and understanding you should be able to get past this ‘sticky’ phase. Rufus needs your understanding and help to feel secure and happy.

I hope this helps and wish you all the very best of luck.