A Love Of RottweilersCrating protocol for two dogs when owners work? | A-Love-Of-Rottweilers 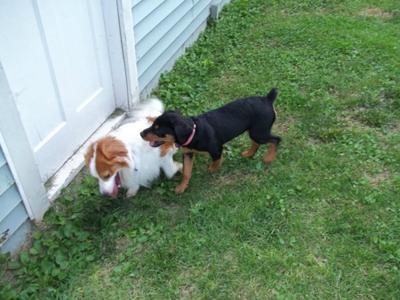 I have two dogs, my rottie named Chloe and my brittany spaniel named Charlie. Most days they are crated for 8-9 hours a day while me and my husband are at work. They are both sufficiently crate trained and it’s not a problem to get them to go in.

My biggest problem is since I started working about 3 months ago, they have so much energy because of most of their day being spent in the crate.

Recently I have been questioning whether or not I should be leaving food and water in their crates with them. I usually don’t because I don’t want them to have to go to the bathroom during the day and not being able to go outside. But I have been worried that not leaving them water may be neglectful.

Is what I am doing ok or are there any suggestions as to what I can offer them while they are in their crates.

Hi Sheena
There’s nothing wrong with your question, and it’s something that many dog owners are concerned about (including me!) if they have to leave their dogs crated for long periods.

If your two dogs are routine crated for a full day, then they’re definitely going to need a fair bit of exercise and a lot of one-on-one time when you and your husband are home. This is to be expected.

Leaving a couple of sturdy, indestructible chew toys in their crates to keep them occupied and give them some chewing activity to release some of that pent-up energy is important. You can see some of the toys I’d recommend for big, power chewers on my Tough Dog Toysa page).

As for giving them food and/or water in their crate, it’s really a personal decision and the stability of your dog’s bladder/bowel control is going to be a big factor.

Puppies simply don’t have the ability to ‘hold it’ if their bladders or bowels get too full, so I wouldn’t recommend putting any water or food in a puppy’s crate. As long as they’re in a cool, ventilated area they should be fine as long as they can drink as much water as they want at other times.

Food doesn’t need to be in the crate at all, as you can feed your dogs in the morning and then again in the evening. However, if you have an adult dog who has excellent bladder control, it’s okay to leave some water in the crate, but I’d recommend using the special bottles rather than a bowl. If you put a bowl of water in your dog’s crate, chances are it’s going to get spilled pretty quickly and then it’s not going to be useful.. plus you’ll have a wet, uncomfortable dog!

Every situation, and every dog, is different so there’s really no ‘one-size-fits-all’ answer to your question, but hopefully my answer will have given you something to go on.

Best of luck with both your dogs.