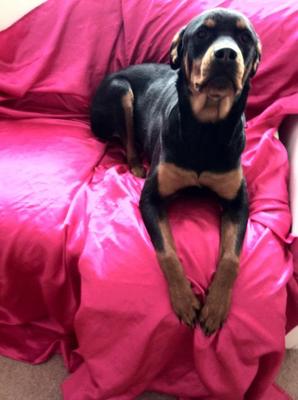 This is my girl “China”, or my “China Doll.” I was sitting around one day on my computer and a friend asked me if I was interested in buying a rottweiler pup for $100.

I had no information on her background, parents, breeders or even the current home she was living in but I agreed. Later that day, someone came by my place with an adorable, but thin, 12 week old female. I was given a little information (which I was later informed to be false) and five minutes later brought her into my home.

We’ve had our up’s and downs, from pooping on my white leather couches to chewing up about 10 of my iPhone chargers and more, but I wouldn’t trade her for a thing.

She turned a year on the 1st of June 2012 (turns out her birth date was about the only correct thing I was told about her), and weighs 100lbs. I found it odd to see she weighed so much at such a young age, especially given all the research I’ve done on females. She’s a tall girl, all legs, and the most clumsy thing I’ve ever Laid eyes on.

She’s my rock, my best friend and an amazing, kind, gentle companion. Worth replacing every single iPhone charger in the world.

I would recommend this breed to anyone who has the time, space and love to give. One of the best choices I have ever made.

Oh, what a sweetheart, that’s a typical Rottie expression and I love it 🙂 Yes, these dogs have a way or winning over your heart, if you just give them the benefit of the doubt. Great story, and pic, thanks for sharing.
~ sue from a-love-of-rottweilers.com