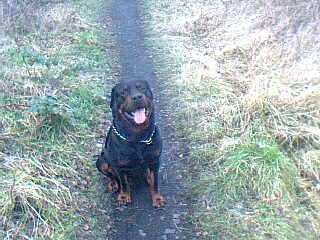 with my dad in the garden

This is chico a rescued rottie who i adopted two years ago – he had been thrown out when his owners moved house and quite literally turned up at my door. I had not had a dog for 12 years but had in the past worked two german shepard dogs ,when chico arrived i didn’t want a dog and definitely didn’t want a rottweiler.

I took him to a local vet to see if he had been chipped and found he had so I took him to the address on the chip and that’s how I found out he had been abandoned. Next the dog warden was called but they couldn’t collect him for 2 days as they were so busy, so could i look after him ? which i did.

2 days later the dog warden came and took him away, he was gone. However the two days I had looked after him I didn’t realise something had happened, I had started to bond with this amazing dog, who had been thrown out like the rubbish but who was so very calm and loving, to me a complete stranger, and I hadn’t realised this until the warden had took him away.

I waited a few days trying to get my mind straight about this dog, did I really want him? could I look after him etc, and could, I rang the dog pound no one had claimed him and after two weeks I was able to adopt him. He’s been with me now over two years, goes every where with me and my wife and is well known to everyone in the area , people who know him will always come over to fuss him, which he loves. He is kind and friendly to all people and other animals too, I have joined the rottweiler welfare society as a result of having chico.

Looking back it was fate and meant to be,these are amazing loving totally loyal animals, and chico, despite is earlier rough life, has not one once of malice in him, I am so lucky to have him.

From Sue at a-love-of-rottweilers.com
I just had to add a comment to this submission, Chicos’ story touched my heart so strongly…..

I’m so happy that Chico found a loving new home, he most surely deserves it and in this photo you can just see his loving personality shining out of that face! Tony, you definitely are lucky to have found Chico, but he is also SO lucky to have found you. Thanks for sharing such a beautiful testament to this amazing breed. Best of luck to you both.