A Love Of RottweilersBUYER BEWARE: Caution and Common Sense when Buying a Puppy | A-Love-Of-Rottweilers

by Chris and Pamela Bayhi
(Texas) 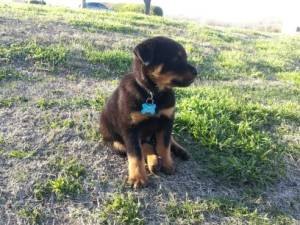 Cash in his Craigslist posting 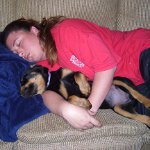 Worn out after his vet visit 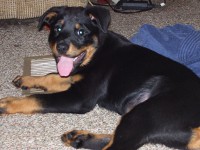 This is a cautionary tale of buying puppies on Craigslist ad other internet websites. January 28, 2012 my wife and I saw a Craigslist advertisement for a cute Rottweiler puppy. “AKC Male German Rottweiler puppy 8 weeks old. Husband and I don???t have the time for him and have a small child. Championship bloodline, grandparents German. $800.00.”

As a COE (Code of Ethics) Rottweiler breeder & trainer, and past breeder/trainer of German Shepherds for 10 years, I happened to be looking for another quality male Rottie. The photos looked promising, showing a beautiful male puppy, healthy and plump. I spoke to the owner who stated he paid $1,600 for the puppy. Unfortunately, his wife worked during the day and he worked at night. They didn’t have time for the pup, nor did they have a fenced in back yard. Therefore, the puppy spent 23 hours a day in a wire crate that could have housed a Great Dane. The guy told me he understood he would take a loss on the purchase price of the puppy but hoped to recover at least half ($800.00) of his money back.

Over the next two weeks we kept in touch every other day. After two weeks, we scheduled an appointment to go see the puppy. It was a 3 hour drive one way. When we met the owner and his wife, they seemed nice. The puppy was 11.5 weeks old. The husband again explained that because of work schedules, there wasn???t a lot of time for the puppy. I noticed that when the puppy went over to the woman, she would gently push the puppy from her with her foot, as if the puppy had germs or she didn’t want the pup by her. I also noticed that every time their little girl, about 5 years old, would go near the puppy, the woman would tell the little girl to “get away from the dog”. It was uncomfortable to say the least. Their home was in disorder, the puppy’s cage had not been cleaned, and his food, water, toys and waste were all in the cage on a bed of newspapers. I got the feeling that the husband wanted a Rottweiler so he could say he had a Rottweiler, but the wife didn’t support his decision.

I examined the puppy. He seemed happy to get any attention, came when called by his name, and had that “puppy bounce” in his step. However, he looked malnourished. On further inspection, I noticed that some of his upper teeth were missing. I was told by the owner ???They just fell out???. He looked nothing like the puppy shown on the Craigslist photos. On the positive side, the puppy never stopped wagging his little nub of a tail. The tail docking was perfect at 3 vertebrae. All of the dew claws were removed with no scarring. This was some of the best dew claw removal work I???ve seen in a long time. In addition, his Black & Mahogany colors were striking!

Because I was looking for a breeding male I asked for the AKC registration paperwork. I immediately noticed the breeder was the same person we bought Raven (our female) from. The breeder had very nice dogs and Raven turned out to be a beautiful 85 pound Black & Mahogany adult with good confirmation and disposition. However, I knew the breeder did not have German imports. This raised red flags for a number of reasons. First, the guy lied about the “German” in his Craigslist ad. Second, I couldn’t remember Raven’s lineage. The breeder always used the name of their kennel for the last name of their dogs, which made the possibility of line breeding (in breeding) difficult to tell. My wife and I left, explaining to the guy that we wanted to breed the pup later in life, but could not because of the possibility of kinship between Raven and their puppy.

On the drive home, I could not get the puppy and his living conditions out of my mind. I called a friend who looked up Raven???s pedigree off our website. The mother and father of the puppy were from the same breeder, but were NOT related to Raven! I spoke with my wife about the puppy some more and she agreed that this had gone from looking to buy a male for future mating, to a “rescue”. I called the guy back and explained that the pedigrees were different and we wanted the pup. He met us a bit later with the puppy, a half bag of Iams dry puppy food, a cat collar that was to small, a leash the puppy seemed to be afraid of, and used vaccination vials. Asking price for the pup was $800. After explaining the condition of the puppy, the living conditions and so forth, I offered him $500. He started to balk, but I explained that either he could accept the cash, or my next call was to the Humane Society and law enforcement. The puppy looked that bad. He turned over the puppy and paperwork and we left as fast as we could. The puppy slept in Pam???s arms the whole 3 hour car ride home.

When we got the puppy home, that???s when we started noticing just how bad things were. The puppy could not eat dry food because most of the upper teeth and some of the lower teeth were missing. The puppy???s ribs were clearly visible. I poured a bowl of Iams and a bowl of Puppy Chow for him. He went for the Puppy Chow and completely avoided the Iams. When the puppy tried to eat, he had to take one little piece at a time and try to chew it with only his gums. Most attempts resulted in him dropping the food. It was heartbreaking knowing he was hungry but could not eat. I was going to tube feed him, but we open a can of wet food with gravy that we usually supplement our adults with, in hopes that he could chew the soft meat chunks. He inhaled a can and a half in about 20 minutes.

I decided to weigh him after he ate. According to weight charts, this pup at almost 12 weeks old should have weighed between 33 and 38 pounds. He weighed an even 13 pounds (after eating a pound of wet food)! I had a litter ready to deliver to people on a waiting list. My pups at 7 and a half weeks old weighed 14 to 16 pounds! As a COE breeder, this appalled me. The thought of this poor innocent puppy going through what he did just broke my heart. We called our veterinarian and told them what our suspicions were. We also told them we felt because of the malnutrition, we felt it was an emergency. The vet agreed and an appointment was set for the next day. In the mean time, my wife and I decided to change this little guy’s name. This little monster???s AKC name is ???Engel brachte Retter auf Cash???. English translation: ???Angel brought saviors to Cash???. He will go by the call name of ???Cash???.

The next day, my wife brought the pup to the vet. He was declared in “ok” health, but very malnourished. His front teeth were missing either from too much rough play, or from the pup trying to chew his way out of his wire cage. His fecal was clear but the vet was concerned about his weight. Cash was put on a diet of canned wet food supplemented with scrambled eggs and goat milk powder. He was allowed the run of the house under our supervision. He avoided his new crate, but did curl up with my wife on the sofa. We started obedience and housebreaking training. He learned “sit” in less than a day. He was housebroken in two days. He learned to play fetch in about 20 minutes. He hated the leash that the old owner had given us. We believe he may have been dragged with the leash instead of receiving proper leash training. At night he sleeps on my side of the bed, on the floor on a comfy cedar filled dog bed. His kennel is always open with the door removed so he has a quiet place to go, but he still refuses to go near it.

On 02-19-12 we weighed him again. He gained 10 pounds. He also started to cut his adult teeth. He transitioned to Puppy Chow and is eating hard food a lot better. He still gets wet food once per day. The eggs have been removed from his diet as his growth must be controlled. If any large breed dog is made to put on weight to fast, they may develop heart, dysplasia, and other problems.

We are now in week three of his recovery. Cash has been introduced to our female, Raven. They get along great. He was also introduced to our adult male, Zuwachs. There was a little male bossiness at first. Zuwachs guarded his toys and Cash was barking his disagreement because Zuwachs wouldn’t share. But Zuwachs showed his usual disposition, barking back but never lunging or biting at Cash. When Cash was weighed again on 02-26-12 he hit 30 pounds. He’s not at his goal weight, but again, when it comes to large breeds you don’t want to pack the pounds on to quickly. He has taken to his new Flexi-Leash and obediently takes walks. He has also learned “come”, ???down” and “stay”.

Cash’s breeder was contacted and remembered us from when we purchased Raven. When we explained the situation to them, they were appalled. They agreed to refrain from selling a puppy to this couple again. But this was not the breeder’s fault. When shopping for a new puppy, people HAVE to do their homework so they don’t get in a situation like this guy did. Fortunately, we have the means to do a rescue every now and then. If he passes his health certifications (OFA, CERF, etc.) and passes a breed conformation test, Cash will be bred. If he doesn’t, then he will be neutered at 18 months and will stay with us for the rest of his life at his forever home.

Cash got a second chance. But how many don’t because of greedy breeders and uninformed buyers?