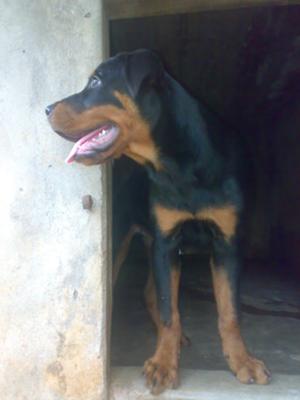 my 10 month rott is not barking at strangers (except at night). strangers came and touch him but he is calm at them.

i want a good guard dog that bites. how can i make him good

Hi Vishnu
Your Rottweiler is behaving exactly how a well-bred and well-balanced Rottweiler should! He’s still a baby at only 10 months and will barely be aware of his guarding instincts and not sure yet what to do with them.

Don’t try to encourage him to be aggressive, or to bite, that will only confuse and frighten him and could lead to big problems later on. One of the things that makes Rottweilers such good guard dogs is that they’re very intelligent and intuitive which makes them a discerning guardian rather than one that is indiscriminately aggressive.

Your pup is currently aware that the strangers approaching him mean him, or his home/family, no harm. At night he is warning you if strangers come too close because he isn’t able to use all his senses (such as sight) as well, and he instinctively knows that when the family is asleep, he needs to stand guard. As he matures (and with a male Rottie this could be not until he’s 2 or 3 years old) his guarding instincts will mature and develop as well and he will be well aware when there’s a threat, and able to warn you or take care of it.

Rotties are so much more than guard dogs and they need lots of love, attention and human companionship. IF they’re left outside, or separated from their families, it will affect how they work/act as they won’t build the same loving bond which leads to a desire to protect. Take good care of your Rottweiler and he will take good care of you.

Hope this helps. Best of luck with your boy.