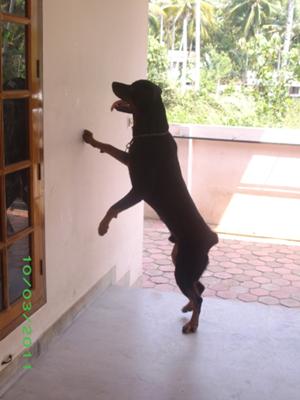 Augustus is with me since he was just a month old. Presently he is close to 13mths old. He is just one naughty pal i ever have come across. There were & are few lovely & bad instances with him as well.

He is quite friendly with his two other pals (One male & a female lab) n hours they play together. Augustus is the youngest among the lot as well as very dominating.

He had his first chance to appear in a local dog show, where he really got an exposure to the tenuous world of competition. Augustus was just 7mths old during his debut participation in the competition where he faced his competitors who were much more experienced & advanced then him. But no hard feelings as it is rightly said that nothing comes for free cause it requires a level of hard work to achieve it. Then I realized that now it’s time for my pal to get himself recognized as well, since i had a years time in hand until the next great show.

So i started getting him trained under a well know dog squad trainer for couple of months he learned a lot and works really hard towards his & my goal as well. I want to see him as a champion which he understands as well i guess.

But one thing which is just worrying me is that though he is so strong, active but he is not really putting on a adequate weight which a 13th month rott should have. Cause i have come across few other rotts of augustus age group who are really well built. Augustus diet is also good but we have stick it to just once a day which includes a bowl full of rice and 1/2kg to 1kg of chicken daily.

So here i require your help to guide me through the process of getting my pal huge. His photograph will explain you what i mean.

Hi Jamshir
At 13 months old, Augustus is still just a teenager and it’s expected that he will be a bit ‘lanky or leggy’ and not be carrying his full weight or muscle development.

Rottweilers, especially the larger males, are very slow to grow and mature, and you won’t see his adult conformation until he’s at least 18 months – 2 years old, it could even be 3 years. Don’t compare him to other dogs of his age, but from different bloodlines, as genetics play a huge role, not just in ‘looks’ but in rate of development too.

There’s nothing to be gained by trying to make him put on more weight, or faster, than he is naturally inclined to do because that could lead to bone/joint problems, even heart issues later in life. Do make sure he’s got an adequate diet, and if you are using home-made food for him I’d recommend checking out this webpage Feed Program For Overseas as it has tips and advice that can help you.

To learn more about a Rottweiler puppy’s growth and development, check out my Rottweiler Puppy Growth Chart page.

Augustus looks great in his photo and I really don’t think you have anything to worry about. Just be patient and give him a chance to grow at his own rate and I’m sure he will be a beautiful adult.

Best of luck with him.